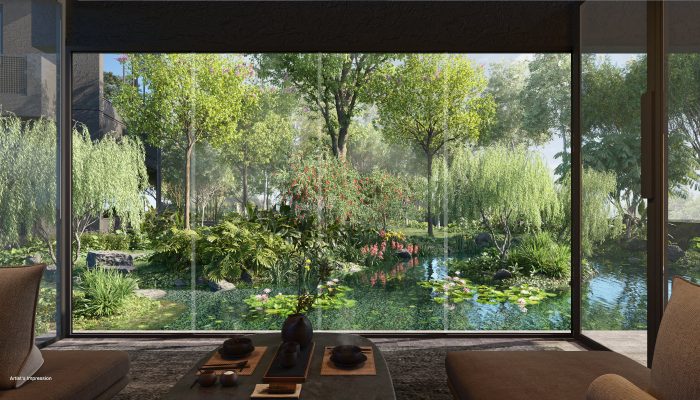 It occupies a rather choice site among recent launches. Right beside and directly integrated with Bugis MRT station, and part of the regeneration of the South-Beach-Ophir-Rochor Corridor. 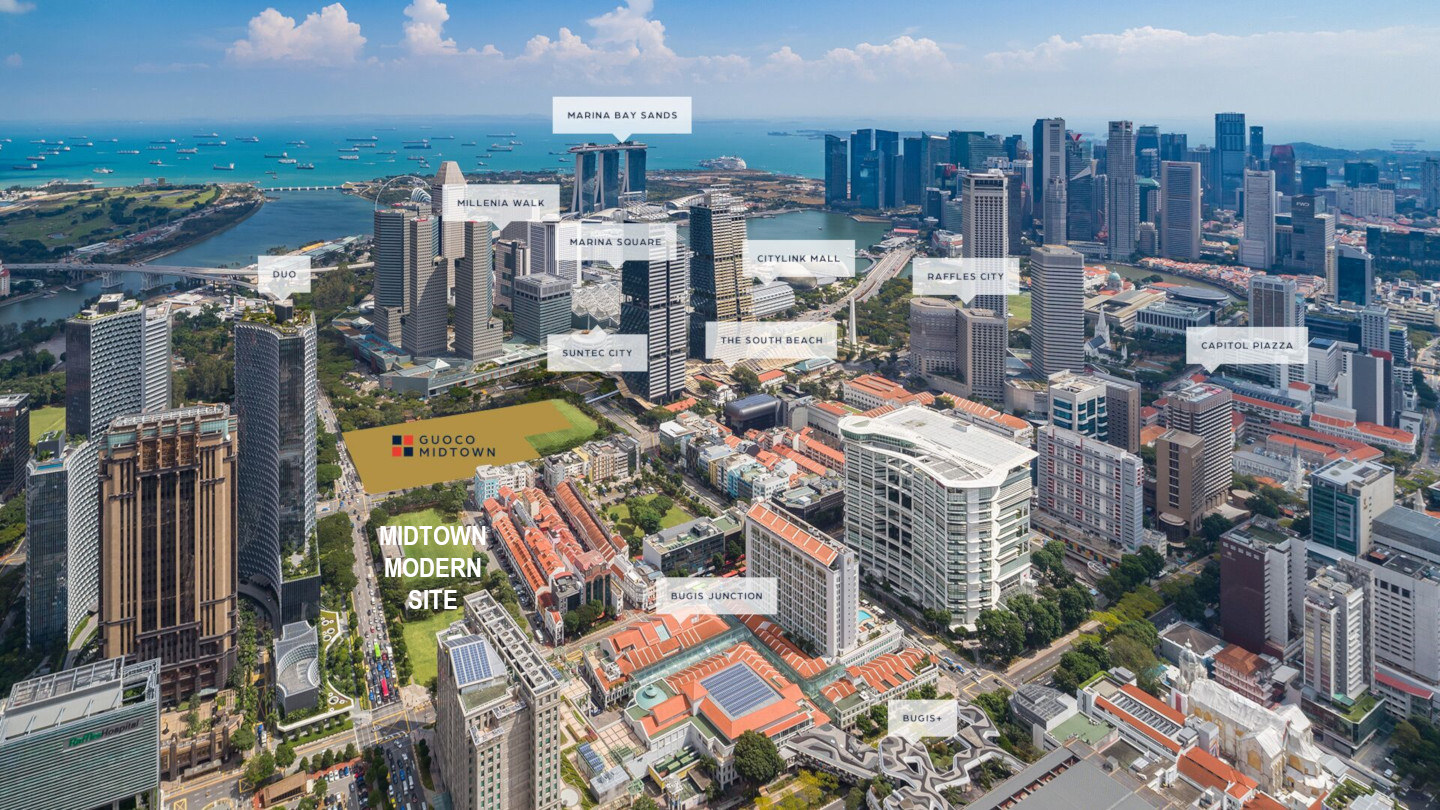 What makes the Midtown Modern condo even more interesting is that the developer is a joint venture of Guocoland Limited and subsidiaries of Hong Leong Holdings. Guocoland is currently building Guoco Midtown just across Beach Road here.

Hence this Midtown Modern site will complement Guoco Midtown, becoming a natural extension of it as Guoco Midtown II. Together with Midtown Bay, it offers a wider choice of accommodation to support the growth of the surrounding commercial enclave of South Beach, Duo, and Midtown itself. 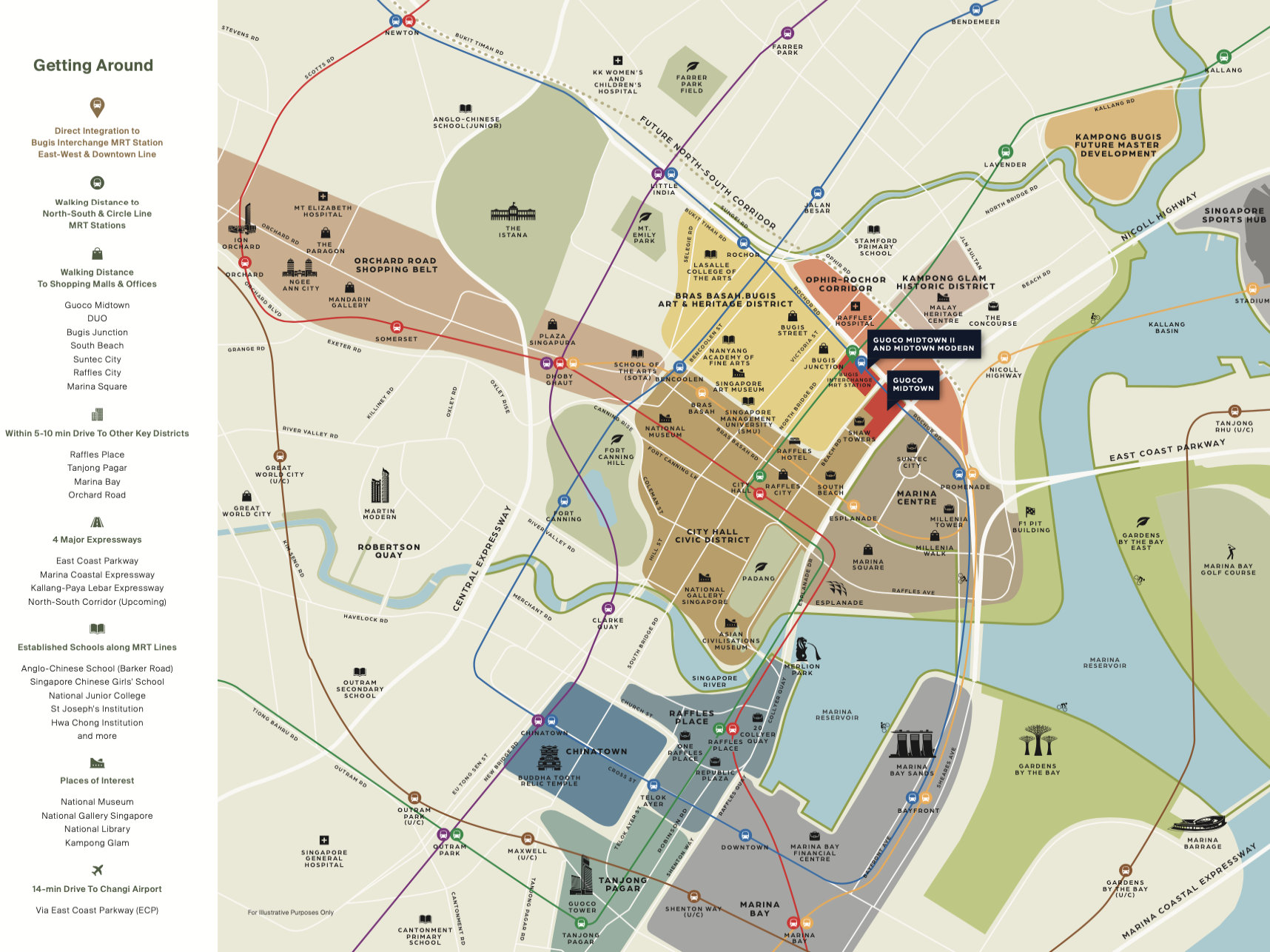 Framed as a ‘City of the Future’ at the epicentre of Singapore’s new ‘Midtown’, it will comprise three retail clusters, a 30-storey high office tower offering 770,00 square feet of premium Grade A office space, and two condominiums housing a total of 777 luxury apartments – the 219-unit Midtown Bay and the 558-unit Midtown Modern. 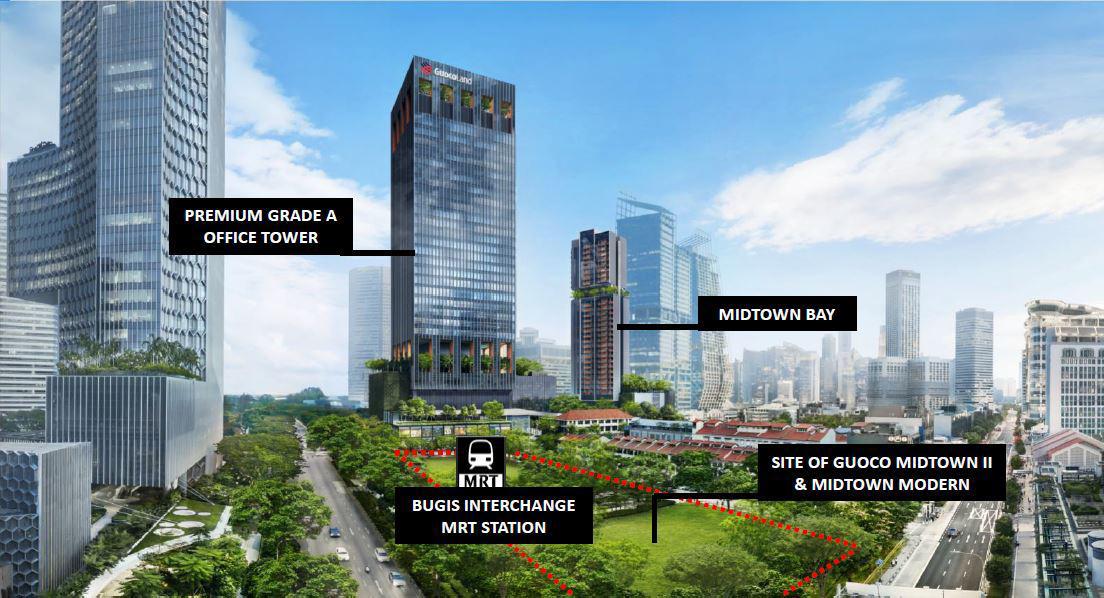 The development will also offer public squares, and a five-storey Network Hub building. This is a first-of-its-kind purpose-built social and business networking club. 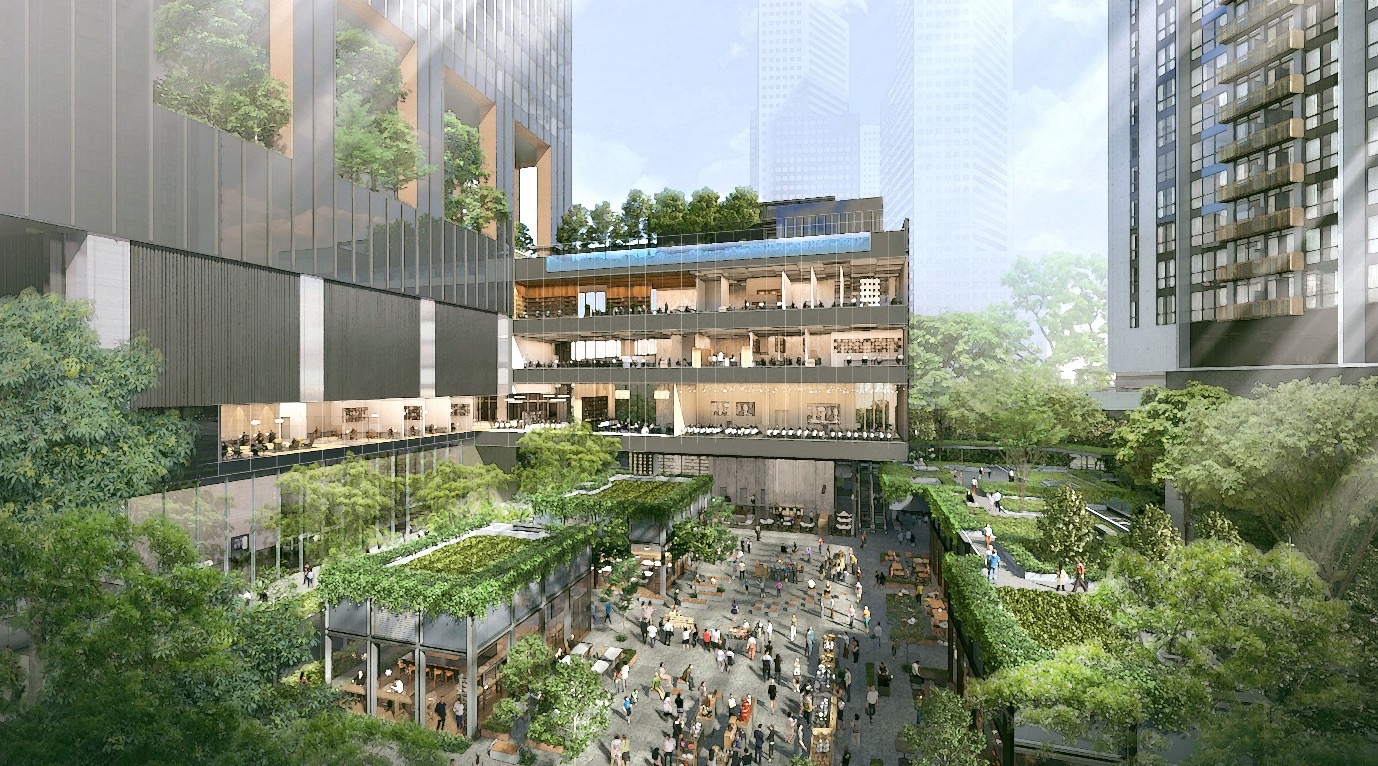 The Midtown Market and Scent Garden

Above pic shows Midtown Market, with the Scent Garden located at the 2nd level to the right, and Midtown Bay on the far right. On the left is the office tower. Anchoring it at the far end is the Network Hub.

Mindful of the call towards ‘greening’, GuocoLand has set out here to create the most extensive privately-developed collection of gardens in the CBD (Central Business District).

Across the project will be woven 30 landscaped spaces and thematic gardens spanning 3.8 ha, from the ground floor to different levels of the podium, and up to the rooftops of the towers.

Ten of these gardens will be publicly accessible. These will give the community the chance to immerse themselves in nature and take part in public events right in the heart of the city, turning these 3.2 hectares of prime land in the Bugis-Beach Road district into a new leisure destination. 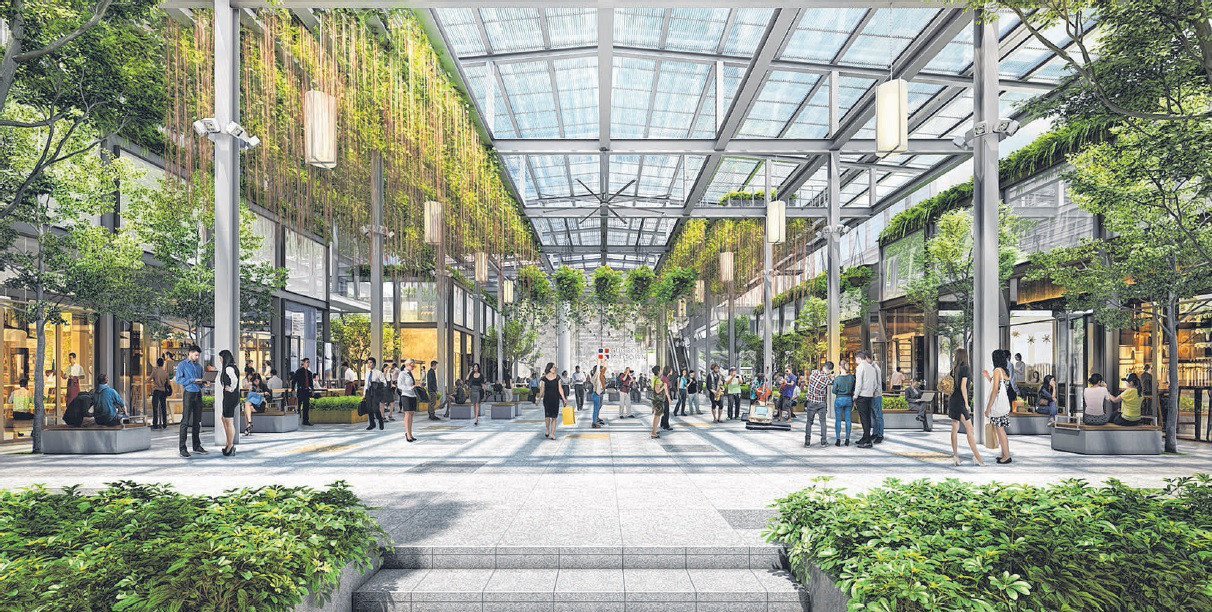 Midtown Market with its collection of plants hanging from the ceiling 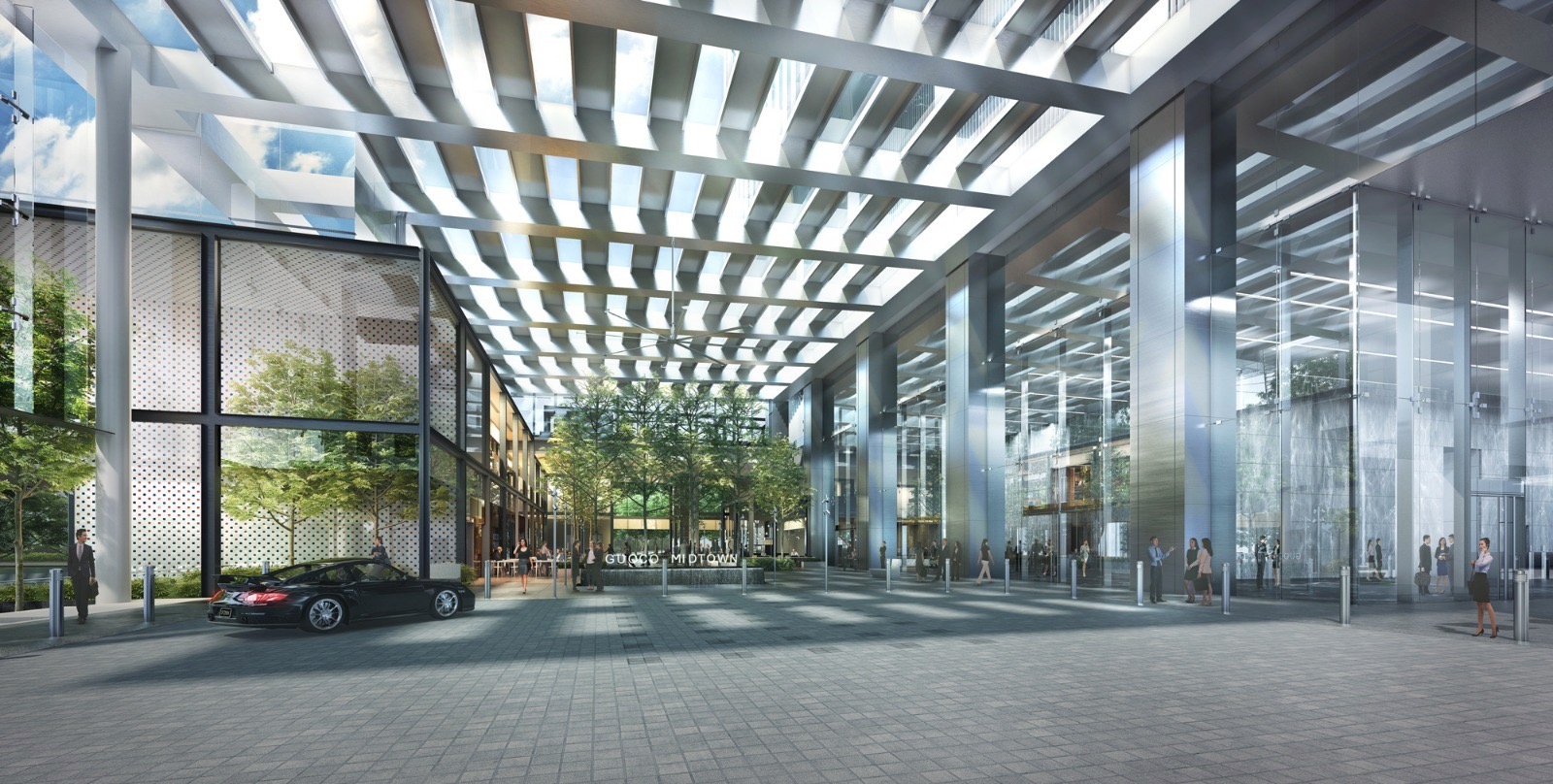 Guoco Midtown will be directly connected to the Bugis Interchange MRT station. Given its scale, it is projected to bring another 10,000 office workers, visitors and residents daily into the district. The development is targeted to complete in phases, between 2022 to 2024.

Alongside other landmark developments like Duo and South Beach, it is part of the rejuvenation of the Beach Road precinct. These are turning the district into an increasing upmarket location, and extending the “downtown” boundaries. 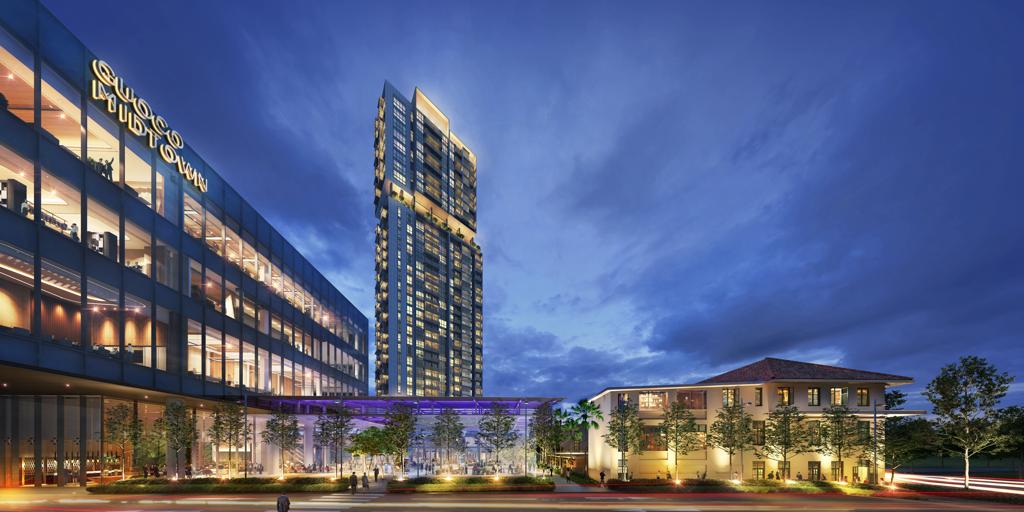 In fact, if some property pundits are right, District 07, Bugis, could eventually overtake Orchard Road as the most prime residential district.

This could come about as the area is changing from a “history-rich, predominantly commercial precinct” into a “hip and vibrant civic district”.

Not least because District 7 has the essential ingredients for residential property investment – cultural richness, easy rentability, and potential for capital gains.

According to GuocoLand, Guoco Midtown is the “…final critical piece of jigsaw that completes the transformation of the area”. Midtown Modern will contribute 558 homes to this piece of the jigsaw.

Guocoland has succeeded in delivering transformative integrated developments before, such as at Tanjong Pagar Centre. They look to repeat that success at Guoco Midtown.

About the Midtown Modern Condo

558 apartments will be built on the site, with up to 2,000 square metres of commercial space at the first level.

The theme of this development is Garden Homes in the CBD. It will comprise bigger format units catering more to families, set on over one hectare of gardens featuring almost 200 plant species. It will offer full condominium facilities, as well as concierge services and networking amenities. 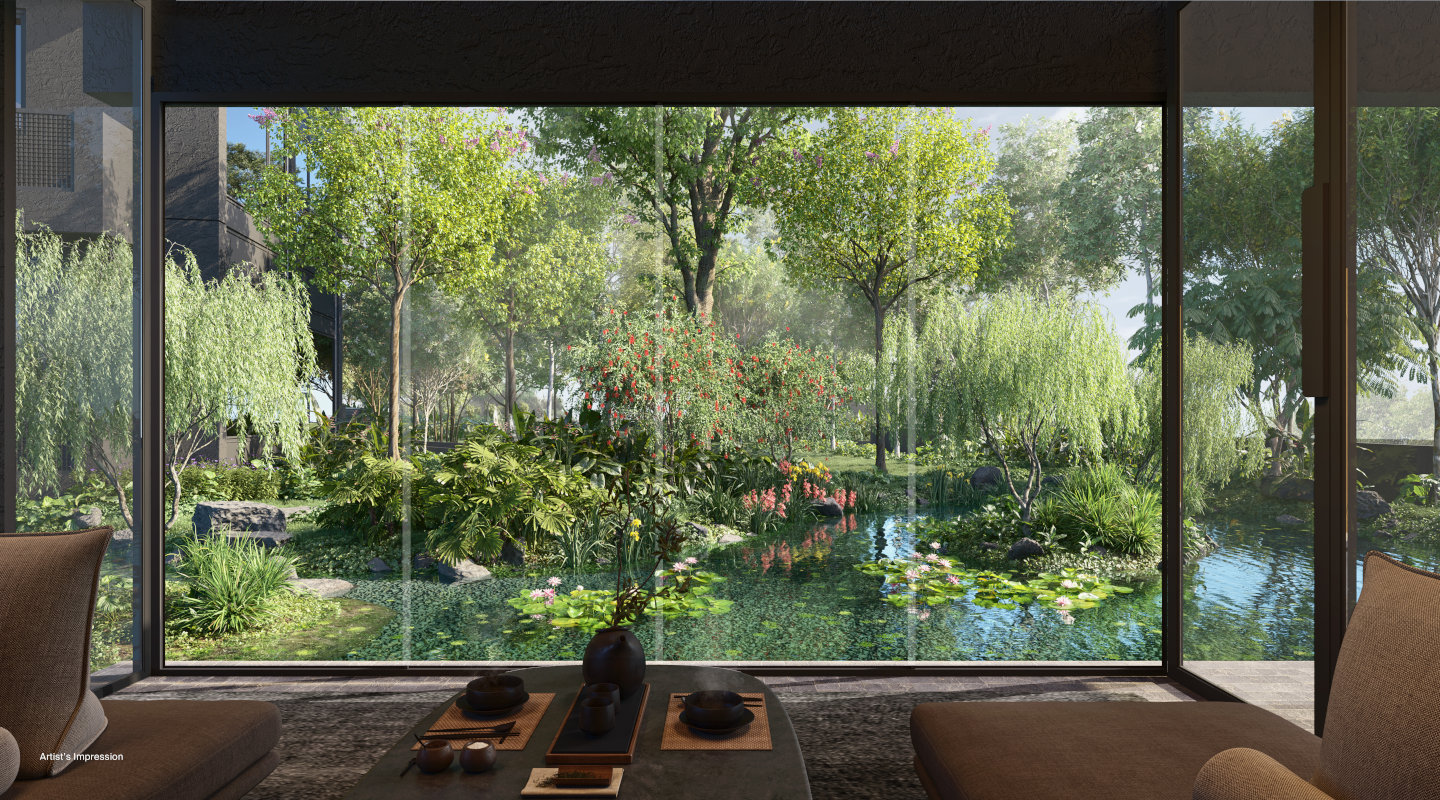 Midtown Modern Condominium . Garden Homes in the CBD . View Out to Garden

This is going to be a signature project, atop Bugis MRT station. Bugis is an interchange station connecting two MRT lines: the East-West and Downtown lines. 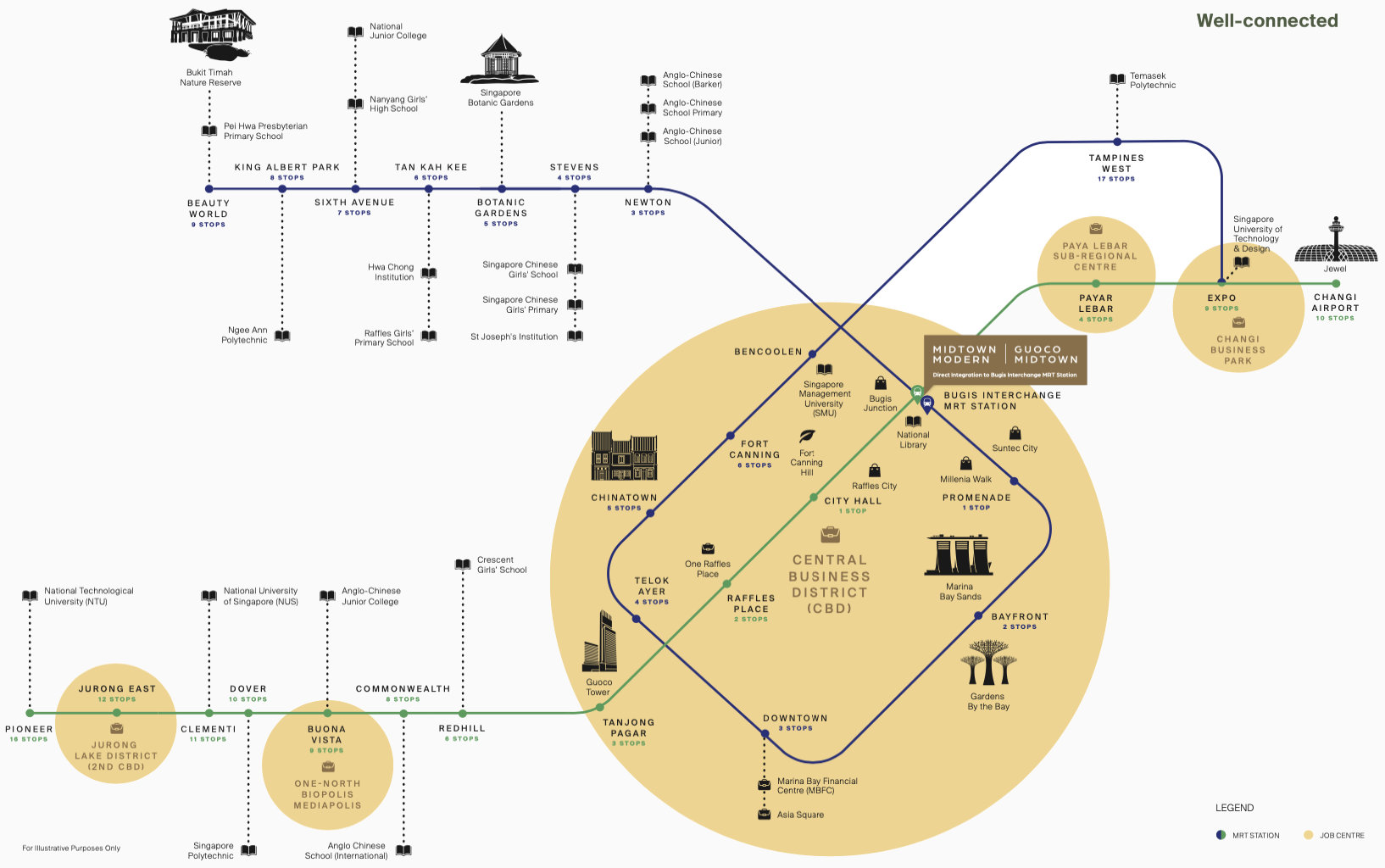 Being connected directly to Bugis station means it will be linked by underpasses to Duo, Guoco Midtown, and Bugis Junction too.

Some higher floor units at the Midtown Modern condo may also obtain pocket views to the sea, or Marina Reservoir, or to the city skylines. 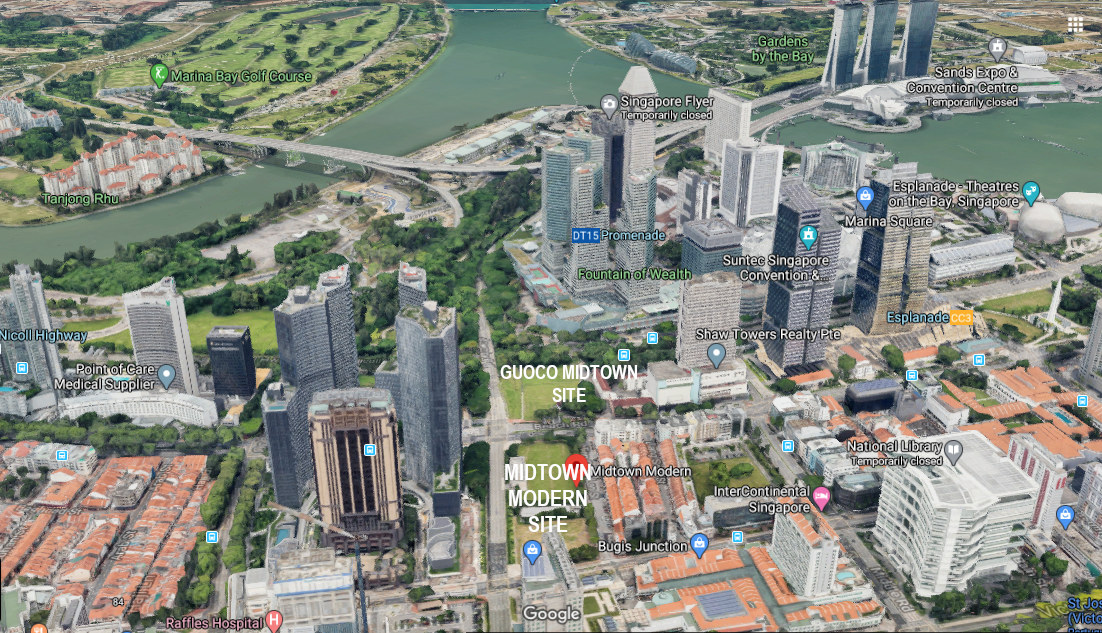 And in much the same way that Midtown Bay will tap upon Guoco Midtown and the amenities in the neighbourhood, so too will Midtown Modern residents be part of this community.

Only two bids were received for this site. Which was rather surprising, especially in light of the 10 bids received for the nearby Middle Road site, that recently launched as The M.

Nevertheless, the winning bid of SGD$800.19 million or SGD1,535 PSF PPR (per square foot per plot ratio), was still in line with market expectations, and a benchmark pricing for the area.

It was also 5.3% higher than the SGD$1,458 PSF top bid for the M site. Ms Christine Li, Cushman & Wakefield’s head of research for South-East Asia, noted that the slight premium could reflect the more favourable location of the Midtown Modern site, as it is right next to Bugis MRT station.

With established developers such as GuocoLand + Hong Leong and the 2nd bidder, a tie-up of CDL with MCL Land, demonstrating their confidence in the area, analysts have postulated that the other developers could have been put off by the hype over this parcel, and expected aggressive bids for it.

Especially since, given the size and land cost of over $800 million, total development cost is expected to be well in excess of SGD$1 billion. Not many developers have the capacity to undertake that. 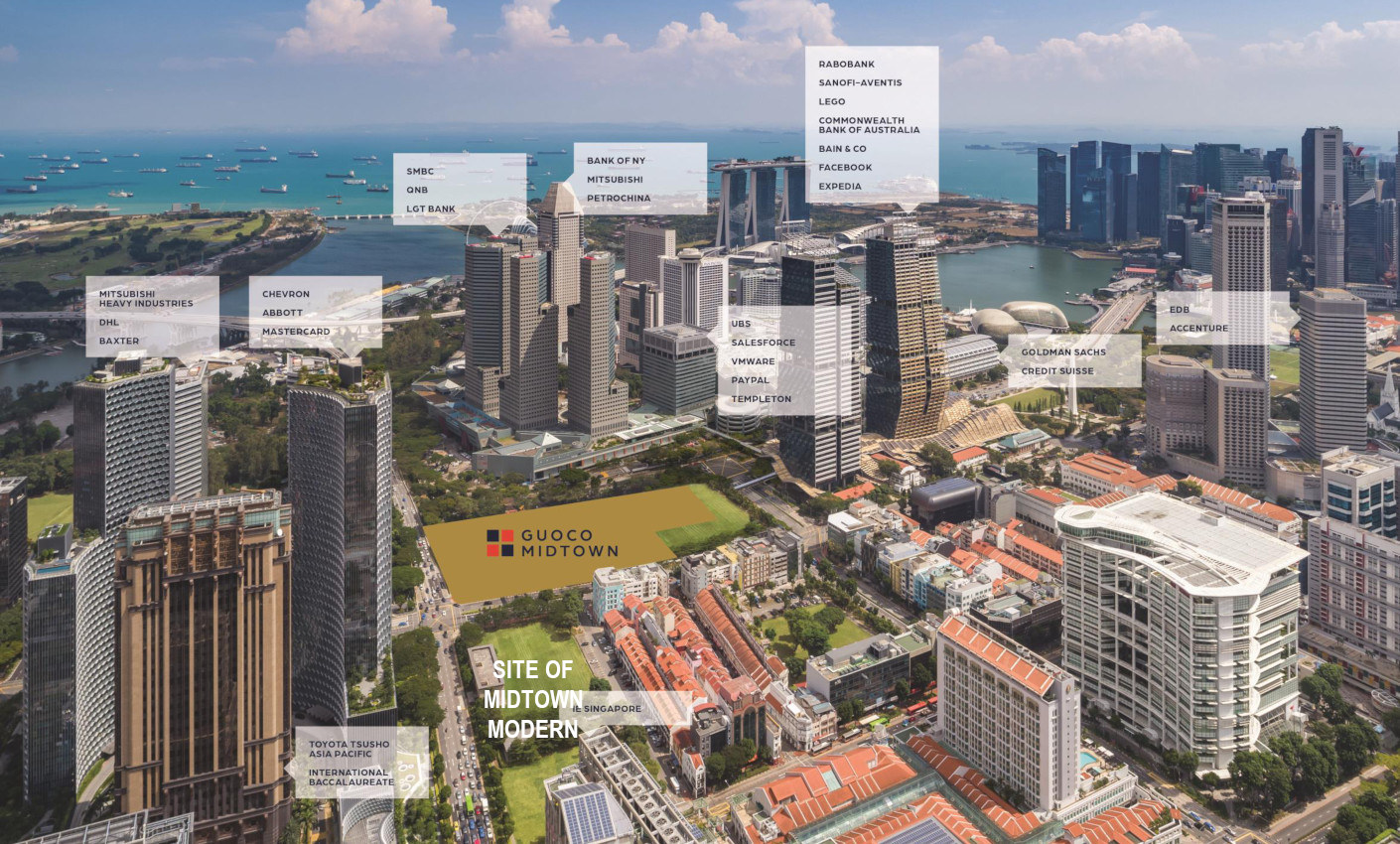 Multinational Corporations in the Vicinity

As a basis for comparison, The M, in a slightly less favourable location, recently launched at an average $2,450 PSF. On its launch weekend alone, it sold out 70% of its entire stock. And this was amid the coronavirus scare.

Whether Guoco Midtown Modern can come close to that, will likely depend on its design concept and pricing strategy.

For the full set of floor plans, please drop your contact details in the Form below for the Midtown Modern brochure to be emailed to you. 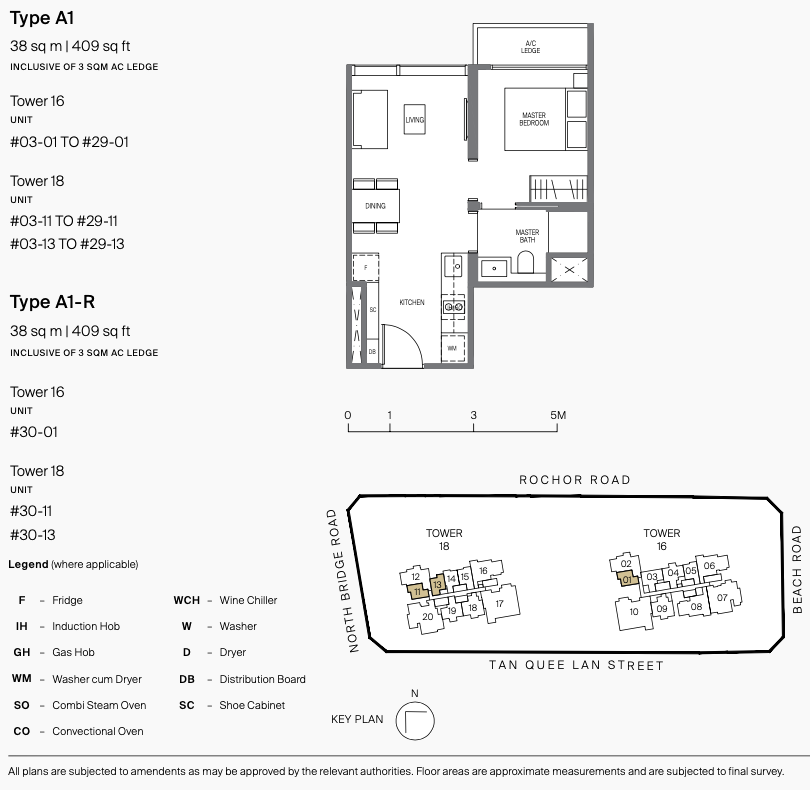 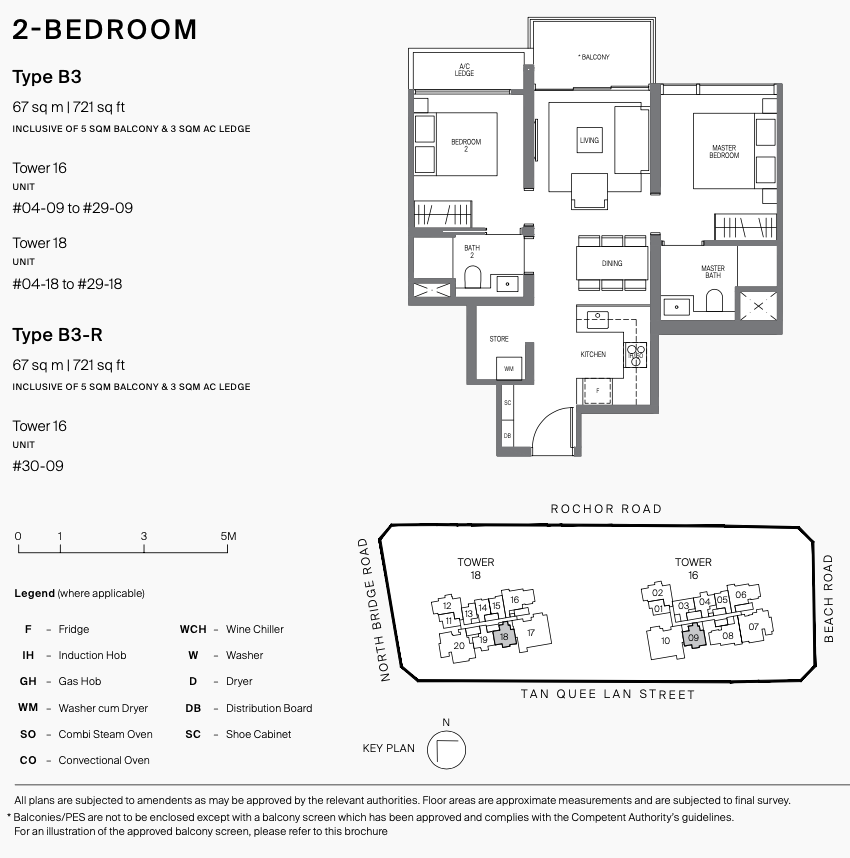 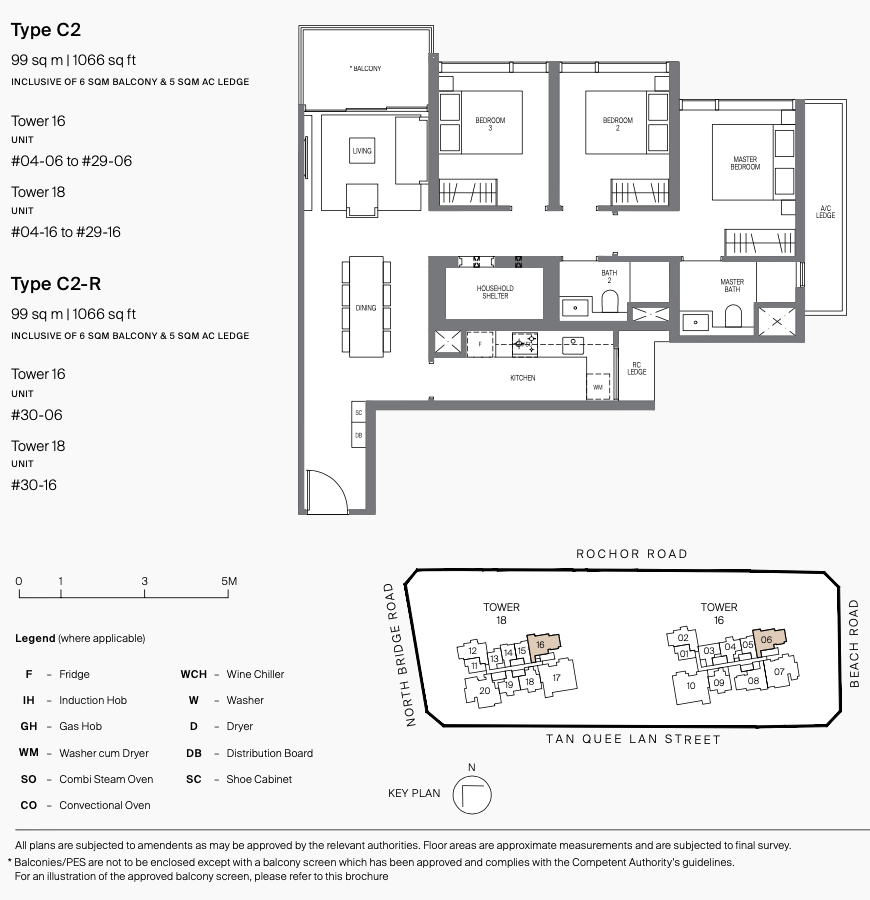 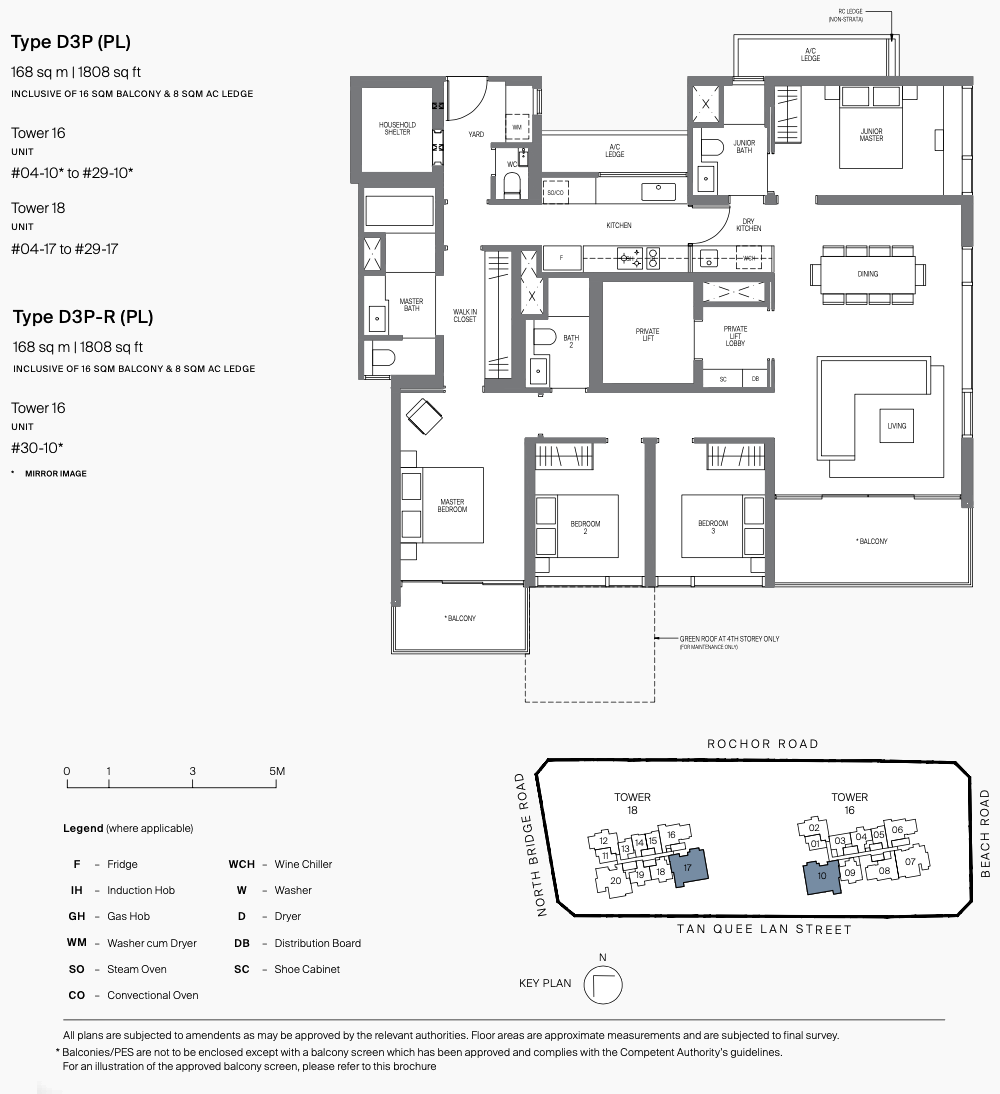 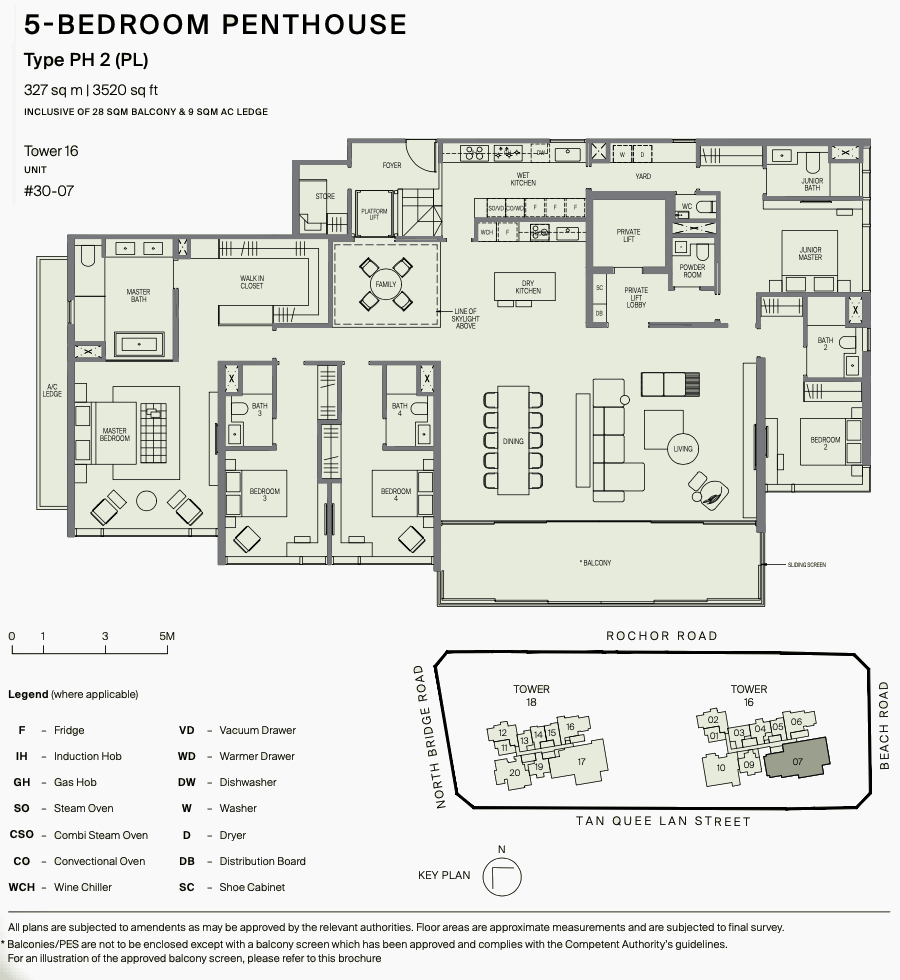 Note
. Floor to ceiling heights: about 3m for 3rd to 29th floor units; about 4.15m for 30th floor units.
. Units come with a Smart Home System.
. The Refuse Disposal uses a pneumatic system. 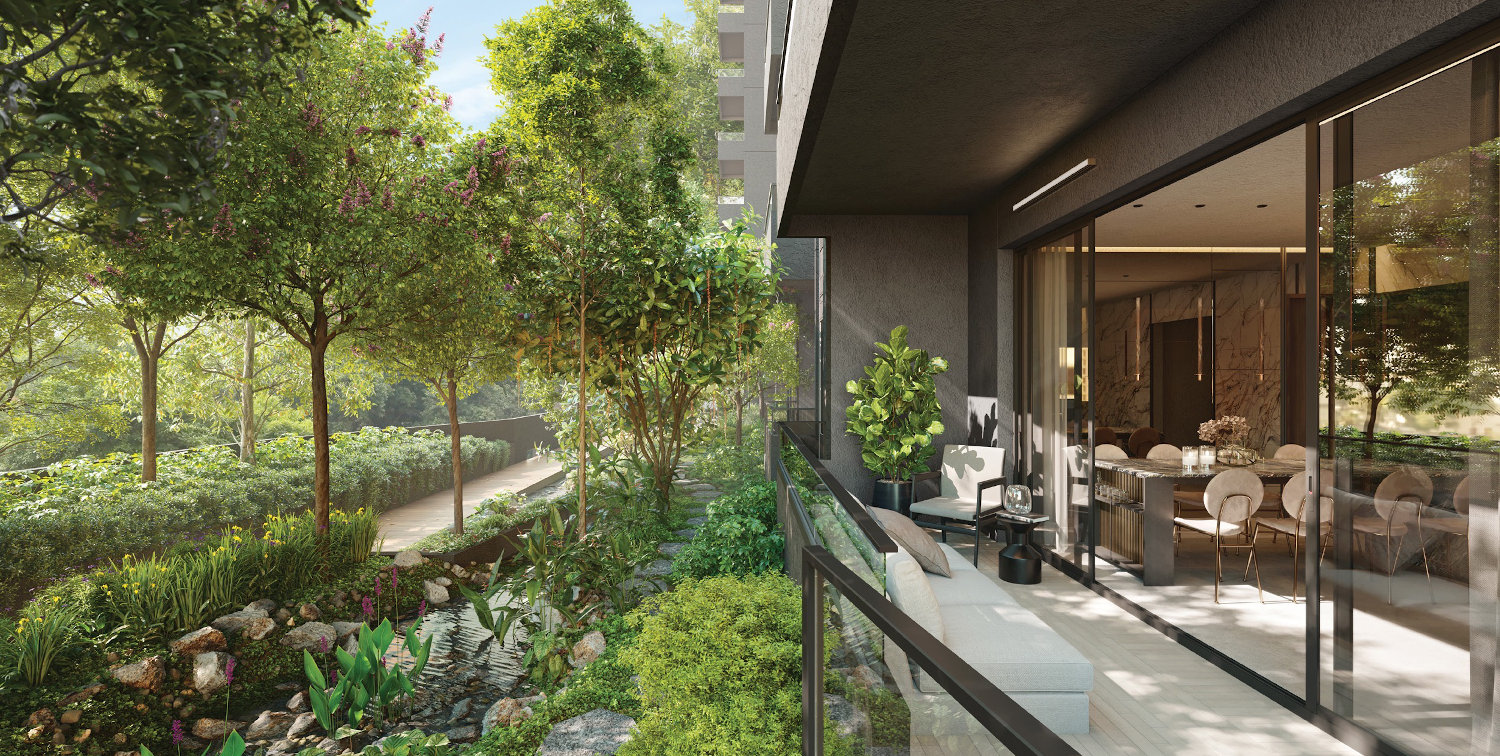 The land parcel is longish, almost rectangular in shape, and tilted in a south-easterly / north-westerly direction. This is an island plot bounded by major roads that makes for ease of access.

It borders Rochor Road on its north-east. This side is also where it abuts, and sits on, the Bugis MRT station underground serving the Downtown line. Exit D of the station leads out here.

To the north-west of the site is North Bridge Road, and Bugis Junction.

Tan Quee Lan Street hugs the site on its south-west, across which are a few rows of heritage shophouses, mainly three storeys high. Many of these have been rather nicely, even elegantly refurbished in some cases, housing an intriguing selection of shops and eateries.

And on the south-east is Beach Road, with Guoco Midtown opposite the site. While this project blocks Midtown Modern @ Bugis from unhampered sea views, there is still room around it for pocket views out.

In fact looking out from the south-east corner, there is a fair bit of space between Gateway West and Guoco Midtown, with views towards Marina Reservoir.

So taking it all round, there should be a good amount of natural light, and fresh breezes. 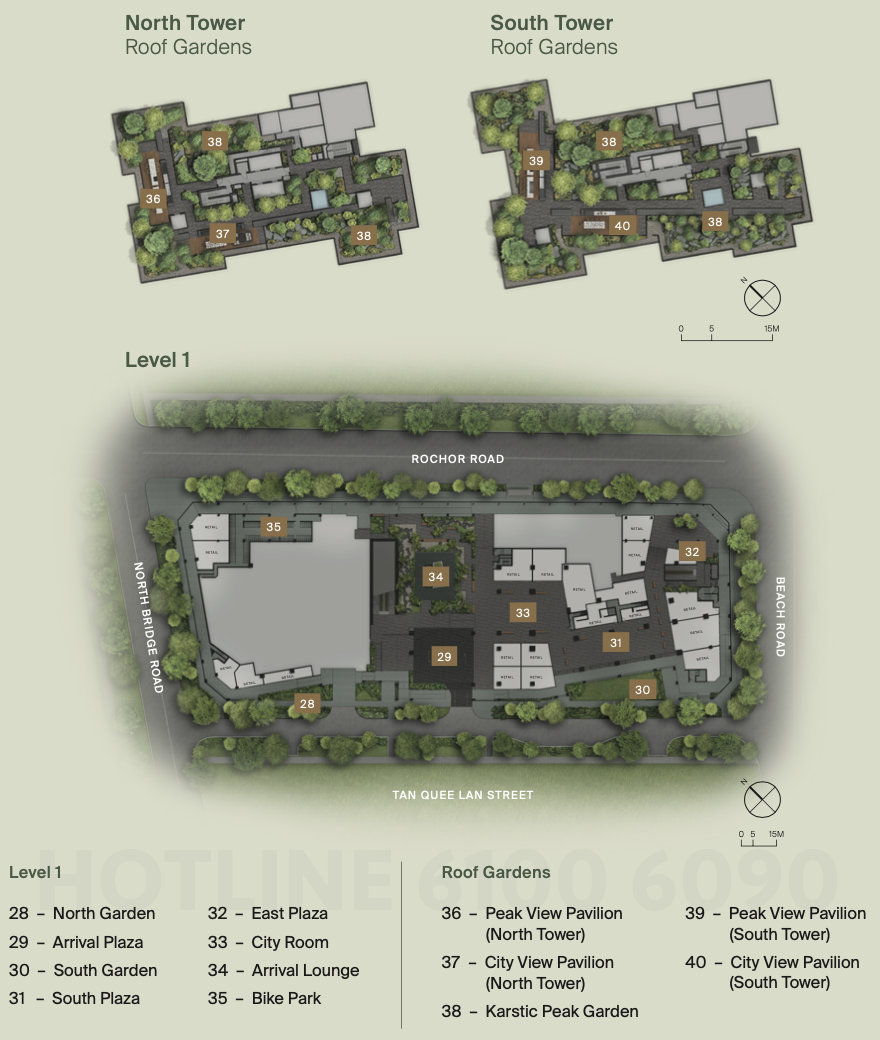 The Grand Lawn Surrounded by the Summer Wood 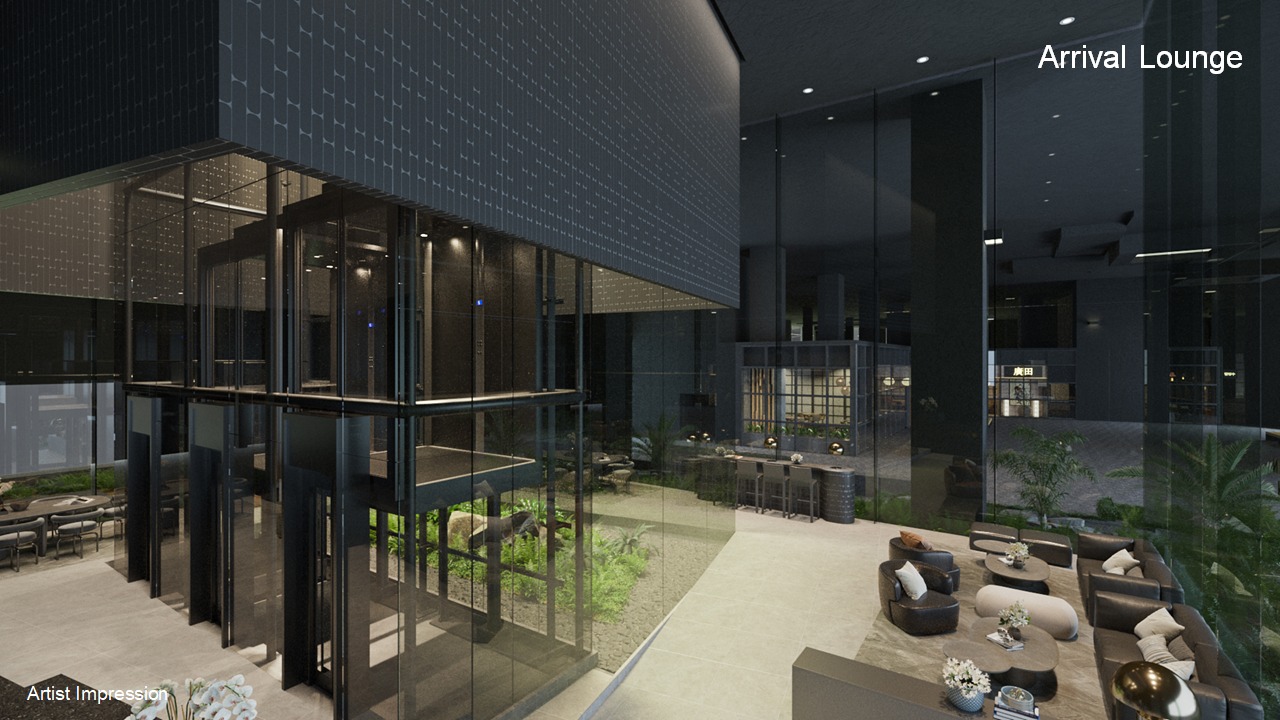 The Midtown Modern showroom is taking reservations for viewings. Viewings are by advance appointment.

Please drop your contact details in the Form below if you wish to book a viewing slot. 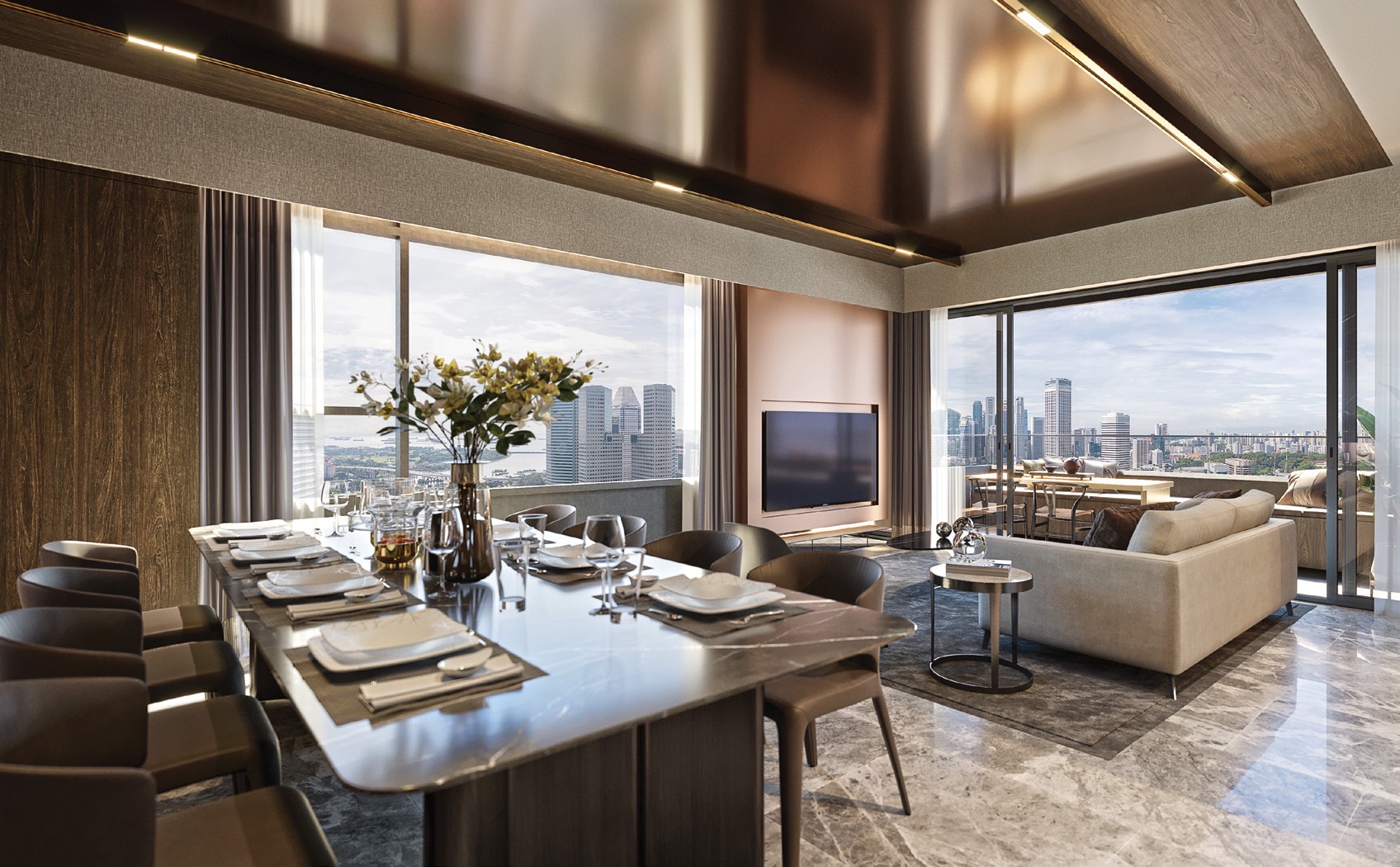 The Midtown Modern condo prices have not been finalised yet. Please let us know via the Contact Form if you wish to be updated on the pricing when available.

The developer, a collaboration of GuocoLand and Hong Leong Holdings through their subsidiaries, paid SGD$800,190,000 for the 124,117 square foot site.

Hence analysts are expecting a selling price of above $2,4xx PSF.

However since Midtown Bay is averaging $2,950 PSF, there might be upward pressure on the Midtown Modern prices to avoid too big a disparity between them.

Midtown Modern Singapore is being developed by a partnership of two of the biggest and most established property players in Singapore.

GuocoLand and its sister company Hong Leong Investment Holdings, through their subsidiaries GLL D Pte Ltd, Intrepid Investments Pte Ltd and Hong Realty (Private) Limited, teamed up to bid for, and will build this mixed development.

GuocoLand Limited (“GuocoLand” or the “Group”)

GuocoLand is headquartered in Singapore, and has been listed on the SGX since 1978. It is a regional real estate player with projects in Singapore, China, Malaysia and Vietnam. Since 2017, it has ventured into the UK and Australian markets as well.

Within Singapore, GuocoLand has completed more than 35 residential projects that have added over 10,000 homes to the local housing stock.

Among its commercial projects is its flagship Tanjong Pagar Centre, a $3.2 billion integrated development above Tanjong Pagar MRT station. This is a vertical city that comprises retail and F&B space, luxury apartments at Wallich Residence, the 5-star hotel Sofitel Singapore City Centre, and the Guoco Tower Grade A offices, fronted by a landscaped urban park. 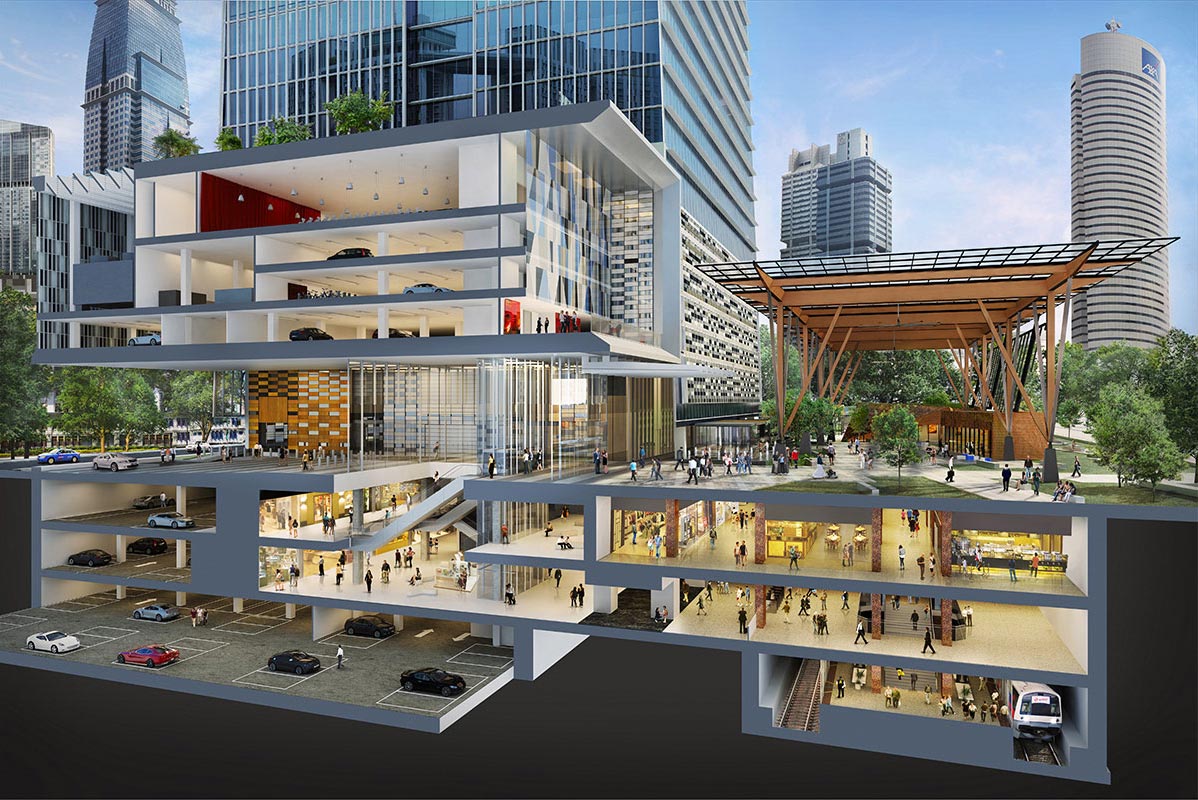 The Group has also undertaken several commercial and integrated developments as well as townships in Malaysia. In addition it has amassed a portfolio of properties from top-tier cities in China, like Beijing, Shanghai, Tianjin and Nanjing.

GuocoLand is known for the quality of its work and designs, having won several awards and accolades, both local and international. 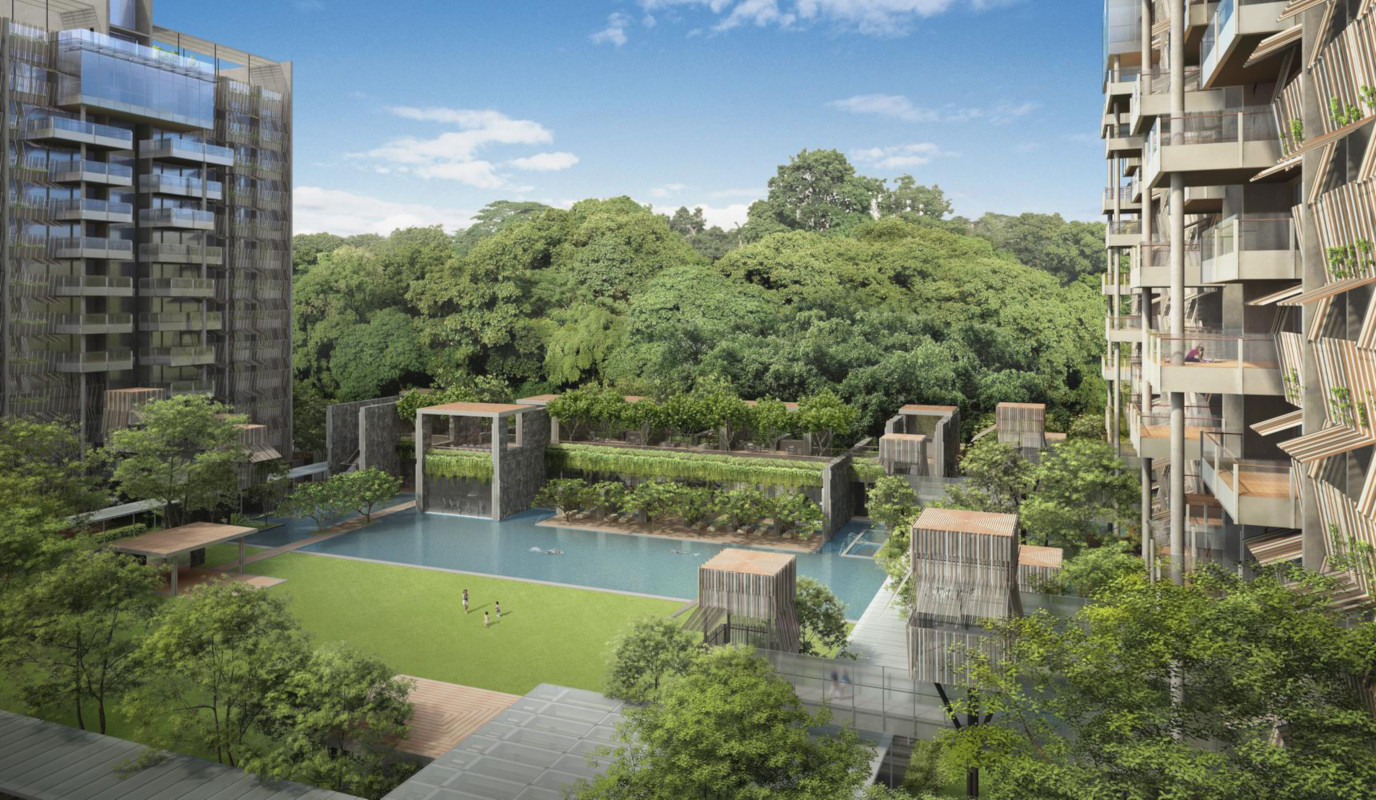 Hong Realty and Intrepid Investments are both units of Hong Leong Investment Holdings.

The Group’s push into real estate development began as far back as the late 1960s. That was when it consolidated its property investments and interests into Hong Leong Holdings Limited.

It is now one of the largest property players in Singapore, particularly in residential real estate.

Since its inception, Hong Leong has built many of the projects dotting the Singapore skyline today. It is recognised as a market leader with over 130 residential, and 100 commercial and mixed-used projects under its belt.

In the process, the Group has earned a reputation for quality work and dependability. It has also amassed a portfolio of over 8 million square feet of lettable office, retail, residential and industrial space.

One Balmoral by Hong Leong Holdings

Examples of its projects are the Avenir, One Balmoral, The Tate Residences, One Shenton, Atria, Sage, The Residences at W Singapore, The St. Regis Hotel and Residences, Grange Heights, The MeyeRise, and Aalto at Meyer Road, and Watermark at Robertson Quay. 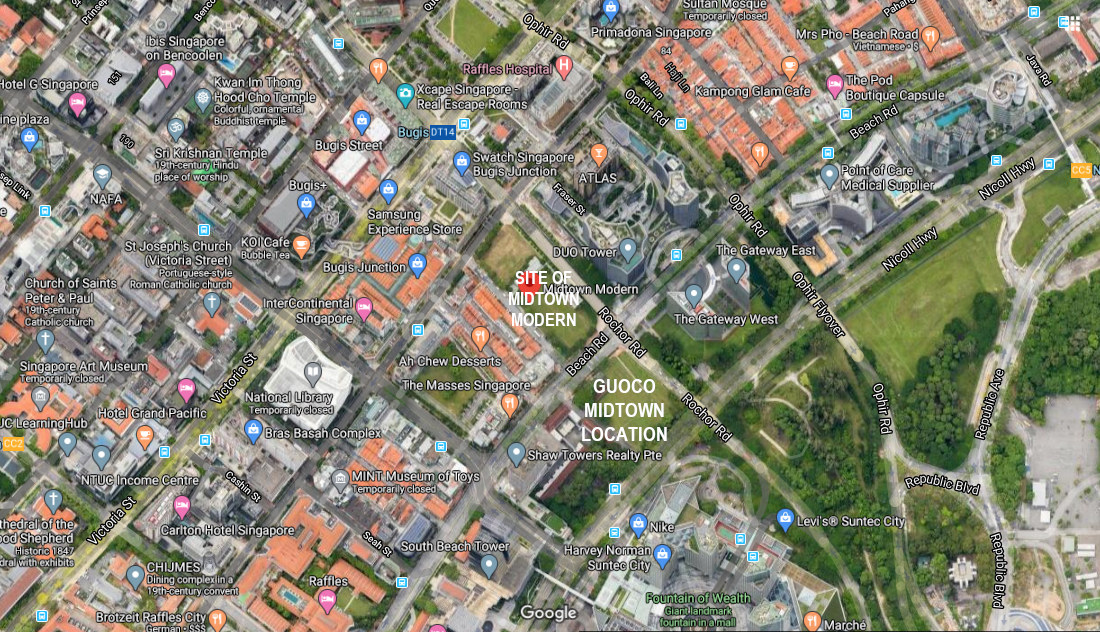 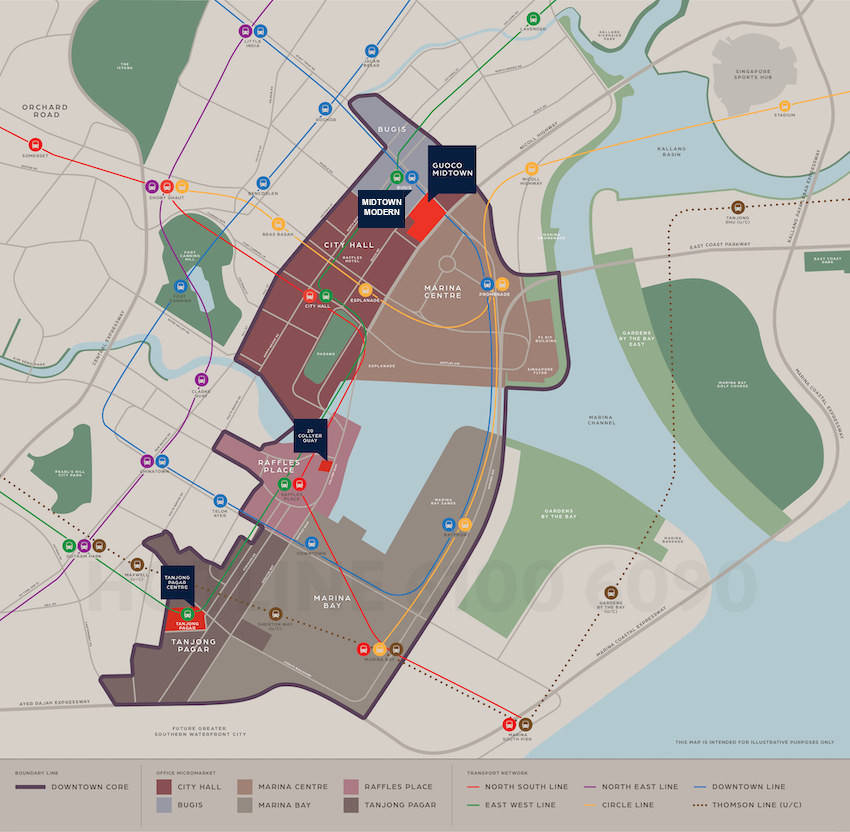 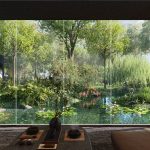