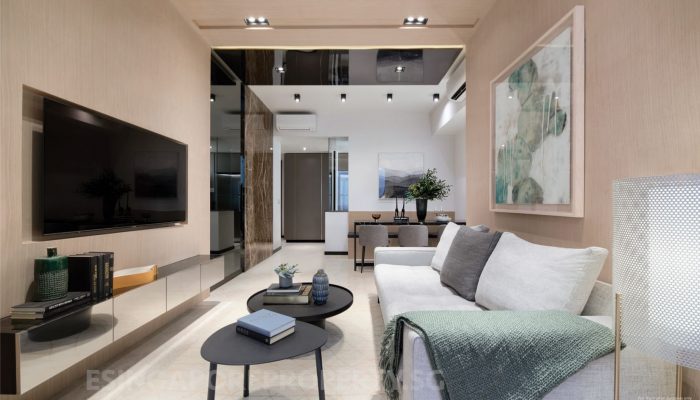 This is a review of the upcoming The Ryse Residences. This is a mixed development that is being built in the heart of Pasir Ris town centre, right next door to Pasir Ris MRT station.

The developer for this project is Phoenix Commercial Pte Ltd, hand in hand with Phoenix Residential Pte Ltd. Both are companies under a consortium of Kerry Properties and Allgreen Properties, members of the Kuok Group of Companies.

This integrated development will consist of both commercial as well as residential components directly linked to the town plaza, as well as the bus interchange. There is a covered link to the Pasir Ris MRT station too, that provides ease of connections to public transport for its residents. 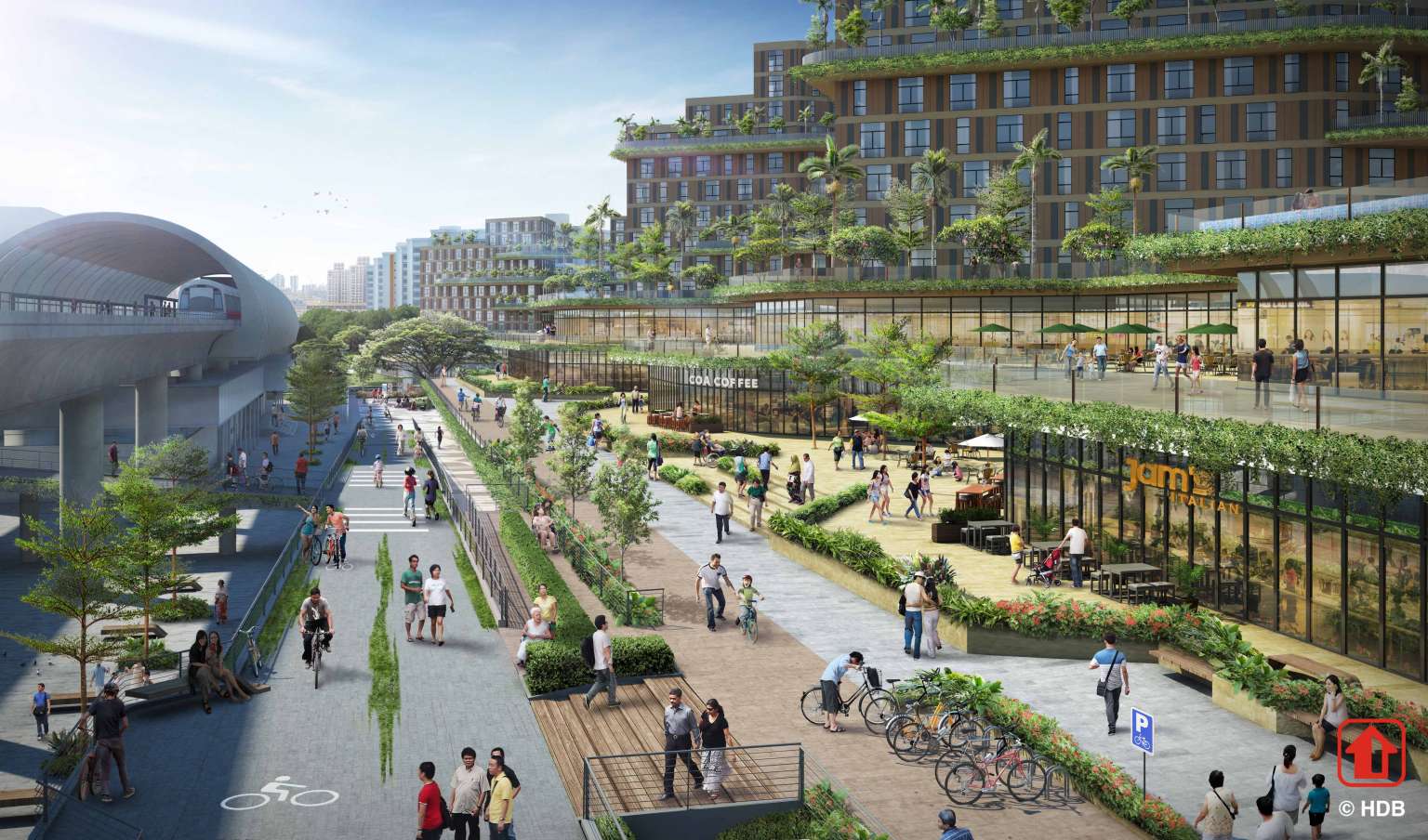 This is a sizeable project, in a prime location close to amenities. As such it will serve as a landmark meeting point for residents in Pasir Ris estate.

There is no indicative pricing yet, but market expectations are that it should be close to similar integrated developments in other HDB estates. Examples abound, with notable ones being Sengkang Grand Residences at Buangkok MRT station, currently selling at around $1,6xx PSF, as well as the sold out Watertown above Waterway Point, at Punggol MRT station, and NorthPark Residences at Yishun.

Such integrated projects offer great convenience to its residents, which is especially appreciated by retirees, busy families, and tenants who usually don’t own a car. 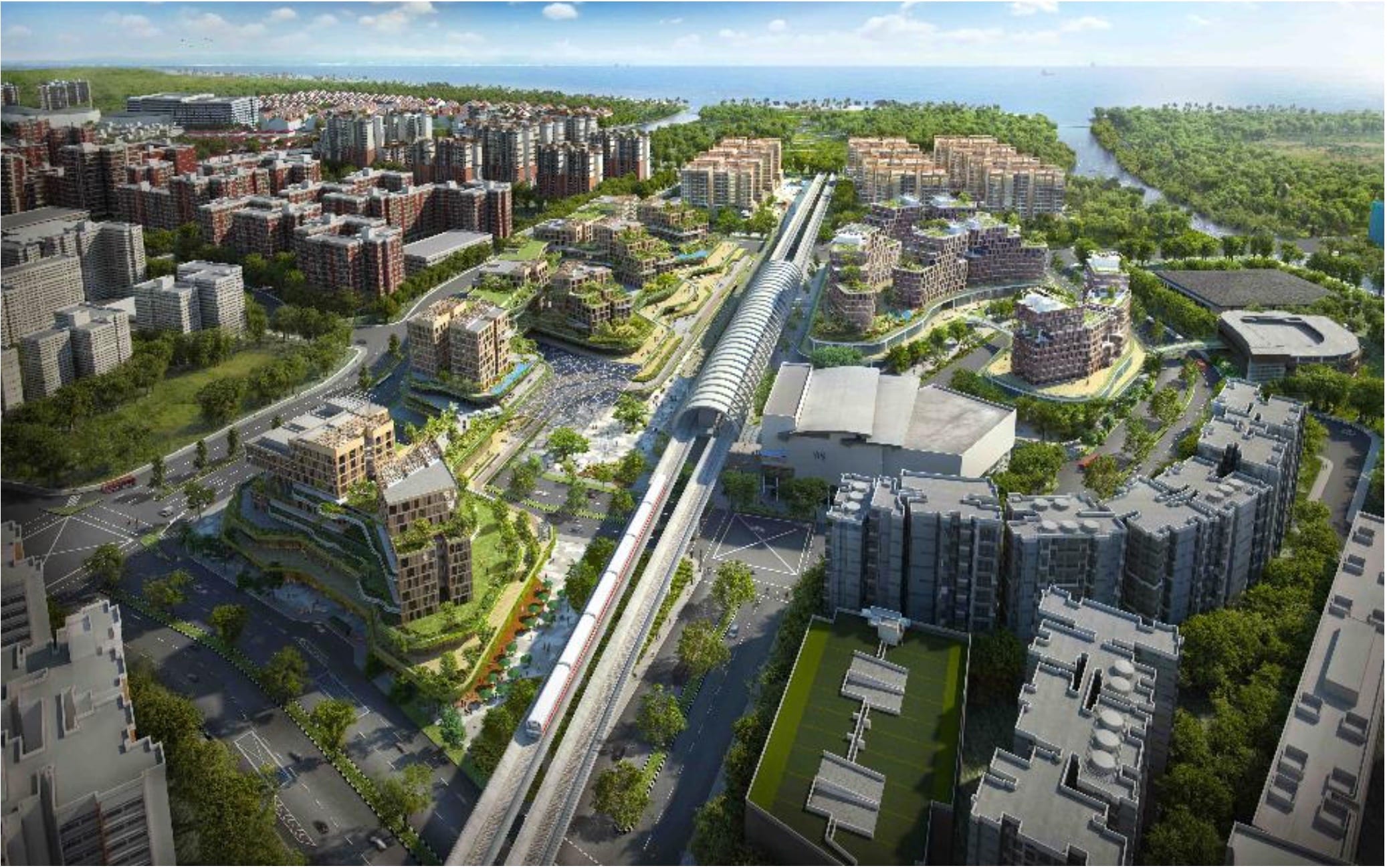 The site for this project was awarded based on the dual envelope concept and price tender scheme. This scheme was adopted by URA, and HDB in this case, in order to give greater priority to quality over price, while not totally ignoring the price element altogether.

It is hoped that with such a dual envelope scheme, the Pasir Ris 8 site will see a project of calibre, with well-designed public areas, and good integration with amenities.

How this scheme works is that it is a 2-stage tender evaluation process. In the first stage, only concept proposals that satisfy most of certain set design criteria are passed by the Concept Evaluation Committee to the 2nd stage.

At the 2nd stage, the tender price envelopes for the shortlisted concepts, are opened. The highest bidder among these is then usually the one offered the site. In this case, it turned out to be the joint venture of Allgreen and Kerry Properties. 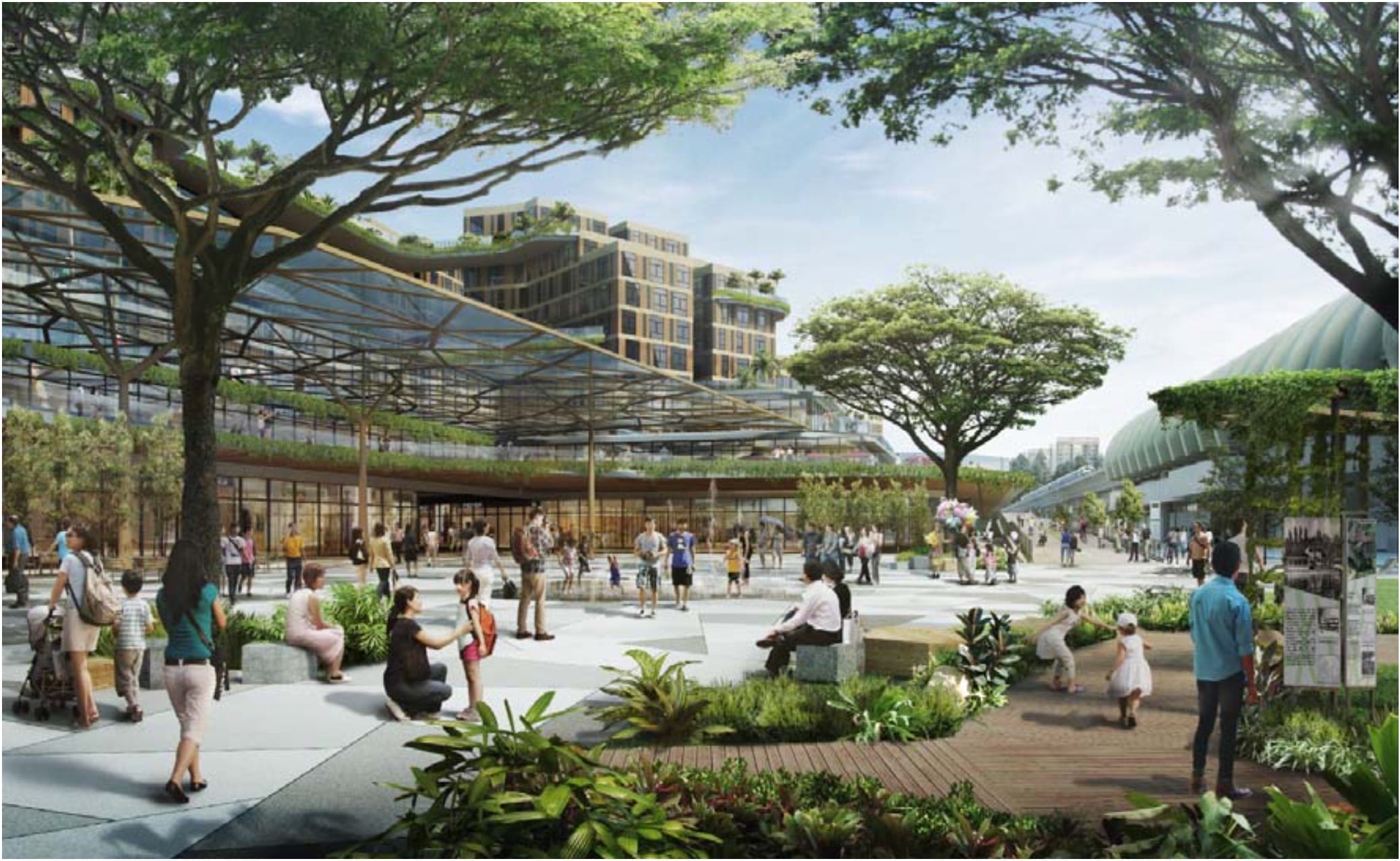 The tender for this particular land parcel launched on 27 August 2018, and ended on 14 December 2018. It is a white site, which means that so long as they included certain minimum components, the developer could suggest alternative usages as well.

This Ryse Residences site was awarded to the top bidder on 22 March 2019.

Pasir Ris is sometimes seen as being too far away, at the extreme east end of Singapore. But what is often forgotten, is that it is actually just the next township after Tampines, which happens to be one of the more sought after HDB estates.

In addition, it is one of the closest estates to Changi International Airport, which is a major transport hub. Furthermore, with the rise of Changi Business Park, and Tampines Regional Hub, as well as new universities and international schools re-locating to this side of Singapore, the perception will likely change with time. 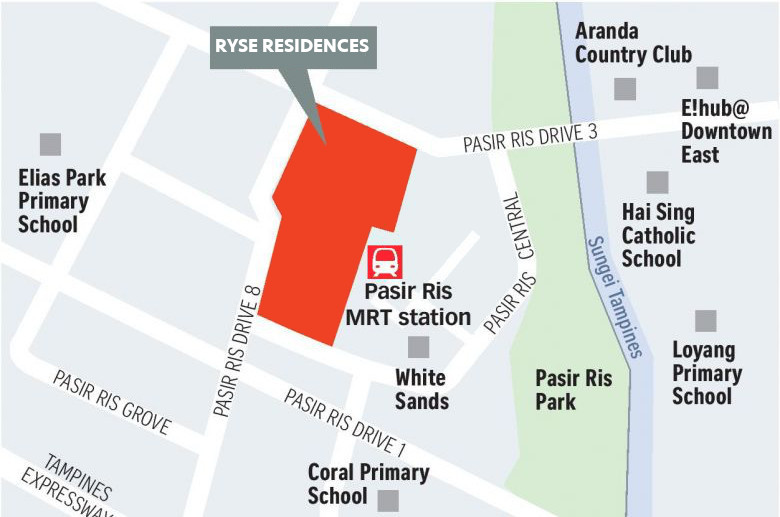 At any rate, for the Ryse condo itself, it has the immense advantage of being located right beside Pasir Ris MRT station. So whatever else it may be like for the rest of Pasir Ris or Changi, residents here taking public transport will certainly not have to suffer long travelling times.

For instance, from Raffles Place station, it is a direct MRT line, the East-West line, and takes 36 minutes.

For those who prefer working near where they live, there are quite a number of employment hubs in the vicinity. Besides the business parks nearby, there is Changi Airport as well, which is already a major employment centre.

Perhaps the greatest attraction of Pasir Ris is its laid-back ambience, and beach front lifestyle. There are several resorts and leisure destinations here. Even the very air itself seems conducive to relaxation. 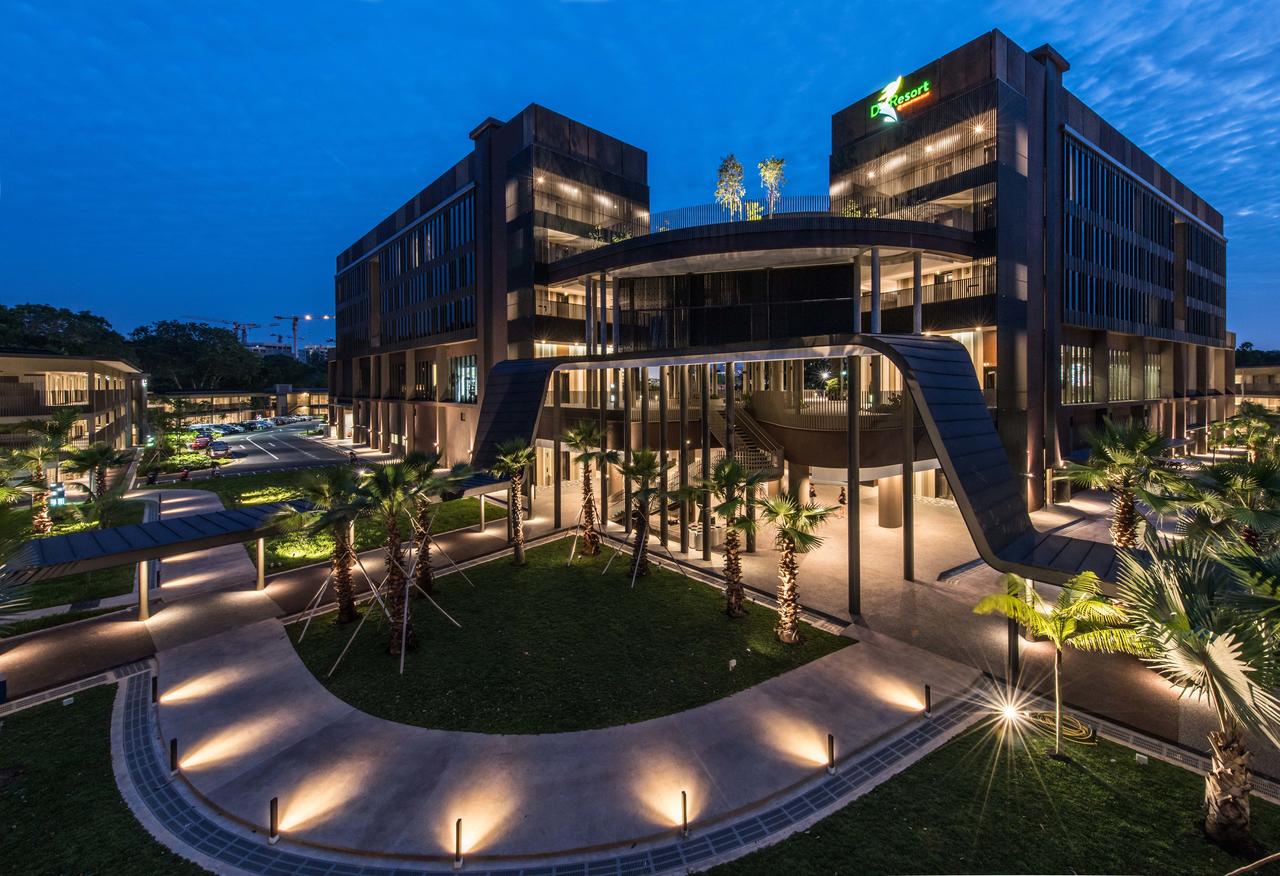 The Ryse floor plans are not available yet. Please drop us a line via the Contact Form if you would like us to send you the Ryse Residence floor plans once ready.

The Ryse Residences site is quite big, covering more then 400,000 square feet, with possible gross floor area of about 1 million square feet.

Those units facing eastwards, overlooking the above-ground MRT tracks, will in all probability get some train noise. But they will likely also get unblocked views too, as there is not much obstruction in that direction for a distance.

Across the Pasir Ris Drive 3 road, there is Pasir Ris Park that spans all the way to Pasir Ris beach. Hence the area to the north of the site is relatively unblocked currently. Higher floor units at Ryse Residences could therefore offer unblocked views, perhaps as far as to Pulau Ubin, and even to Johor in the distance.

Do note though, that part of the park, the section directly next to Pasir Ris Drive 3, is zoned residential as well. While there are no plans to develop it in the immediate future, it could happen further down the road. That may not be for another 10 or 15 years however, and meanwhile, the views and greenery are there for enjoyment.

The Ryse Residences showflat is not ready yet. Please drop us a line via the Contact Form if you would like us to keep you posted on this, or to register you for a viewing.

Note that with the current safe distancing rules in place, that has placed a cap on the number of visitors allowed in any one time, all viewing appointments have to be booked in advance.

The Ryse Residences pricing has not been decided yet. Please let us know via the Contact Form if you wish us to keep you posted on the price list once available.

Phoenix Residential will provide exact prices only on the Preview sales day, but indicative prices will likely be released before that.

The winning bid by the collaboration of Phoenix Commercial Pte Ltd and Phoenix Residential Pte Ltd for the site came up to almost S$700 million. Given the total possible gross floor area (GFA) of 1.02 million sq ft, this equates to a land rate of S$684.48 PSF PPR (per square foot per plot ratio).

On that basis, break even costs could be in the range of S$1,250 PSF, after adding development costs including financing and marketing, as well as construction costs.

With such a relatively low break even point, the Allgreen-Kerry partnership could actually afford to sell the homes here for something like $1,500 PSF, and still turn a very decent profit.

However, given that the CDL-Capitaland partnership is selling Sengkang Grand Residences in the mixed development at Sengkang at close to $1,6xx to $1,7xx PSF, Allgreen is hardly likely to go lower than that.

Especially when one considers that there has not been any major new launches in the estate over the last few years. And certainly not one in such a central and convenient location, in this part of Singapore, for quite some time.

The Ryse Singapore is being developed by a partnership of Kerry Properties, with its sister company Allgreen Properties. Both come under the umbrella of the Kuok Group.

About Allgreen Properties Limited (“Allgreen” or “The Group”)

Allgreen Properties is the local real estate arm of the Kuok Group.

Incorporated in 1986, Allgreen was listed on the Singapore Stock Exchange in May 1999 and was then majority owned by the Kuok group.

It was delisted in August 2011 from the Singapore Stock Exchange following its compulsory acquisition by Brookvale Investments Pte Ltd (which is itself part of the Kuok group of companies).

It has 35 subsidiaries and 13 associated companies. Although Allgreen began operations in 1986, the history and track record of Allgreen’s property-related businesses can be traced back to a time when it started as a division of Kuok (Singapore) Limited in early 1980.

Today, Allgreen is one of the largest property groups in Singapore, well-known for its quality products and track record of steady take up rate of its projects. Locally, is runs a diversified portfolio of properties comprising office and retail space, residential & serviced apartments, and a hotel.

The Group’s portfolio of development work consists of a mix of condominiums, and terrace and semi-detached houses.

As one of the largest property groups in Singapore, Allgreen Properties has a balanced portfolio of residential and commercial properties which caters to a wide spectrum of homebuyers’ needs and price ranges.

Allgreen has also entered into various joint ventures to participate in the development of mixed projects in Tianjin, Shanghai, Chengdu, Shenyang, Qinhuangdao, and Tangshan in the People’s Republic of China. 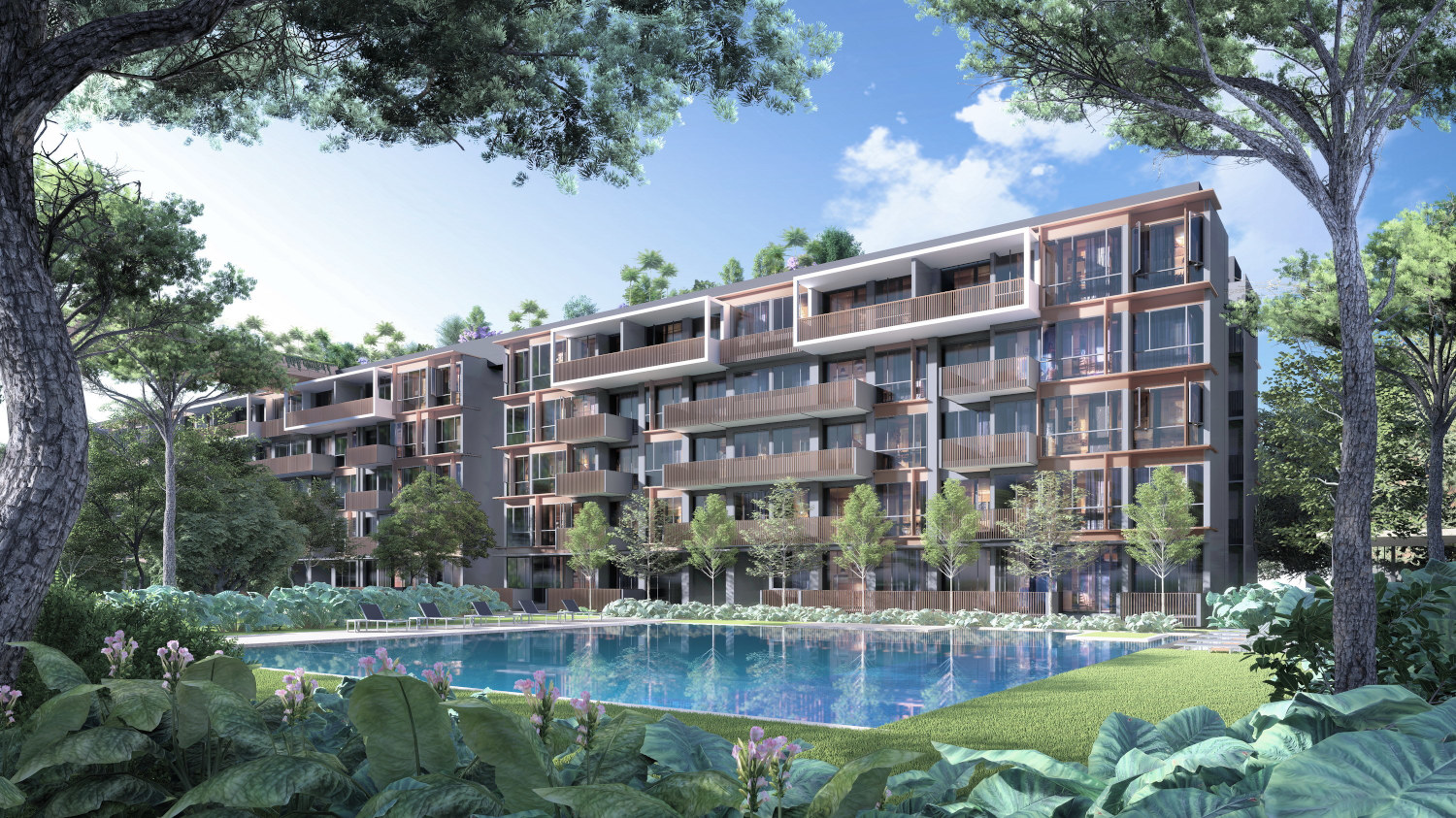 Kerry Properties Limited (“Kerry Properties”), was incorporated in Bermuda with limited liability, and listed on The Stock Exchange of Hong Kong Limited in 1996.

It is committed to developing and managing premium residential properties and commercial complexes in prime strategic locations.

The Group makes ongoing efforts to improve – such as by adding innovative services – its existing extensive real estate network in the Asia-Pacific region.

The Group is well-positioned to keep pace with the upward market trends in Mainland China and Hong Kong. With a wealth of experience in real estate, the Group looks forward to expanding its property portfolio overseas. 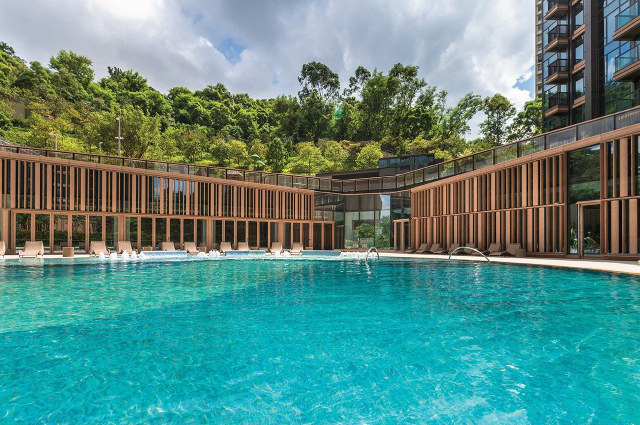 Mantin Heights by Kerry Properties . Developer for The Ryse Singapore 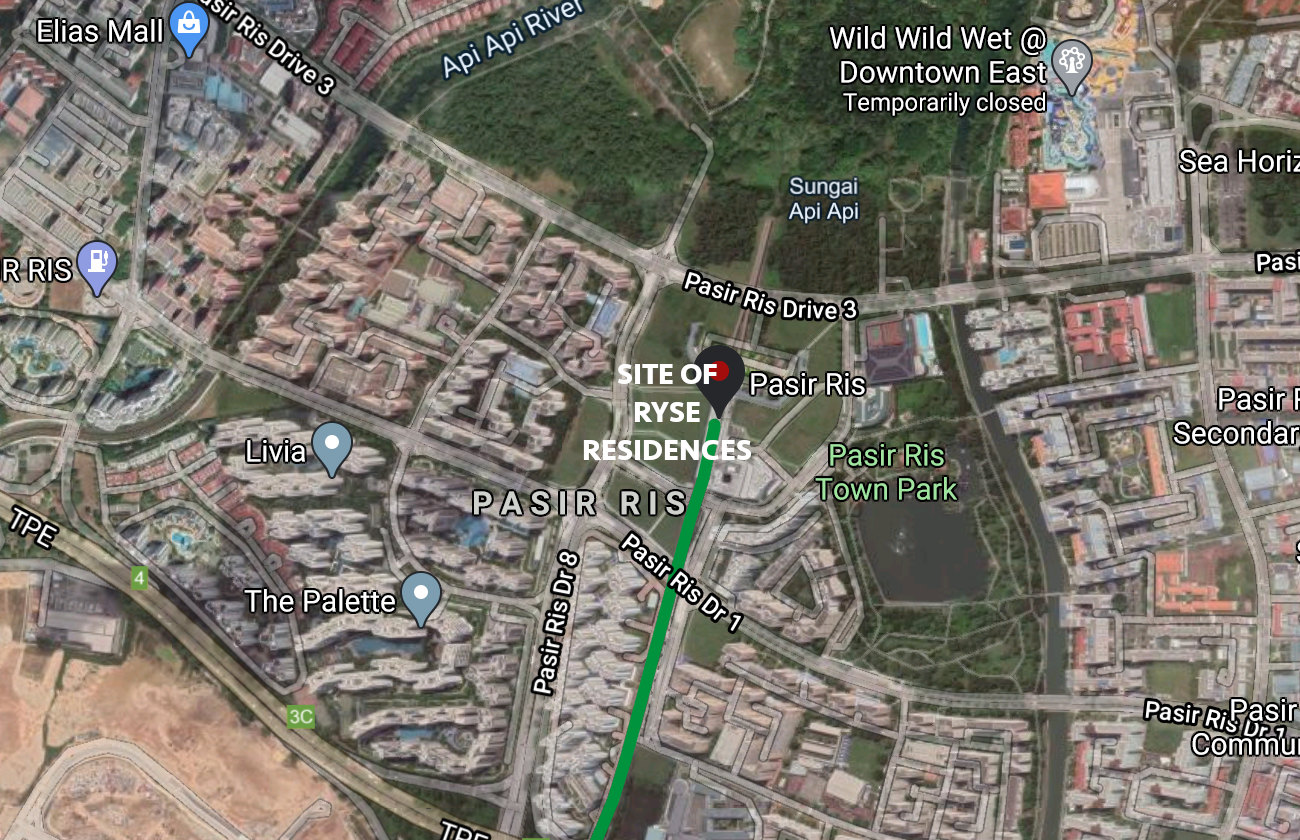 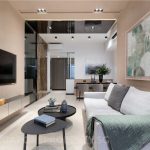