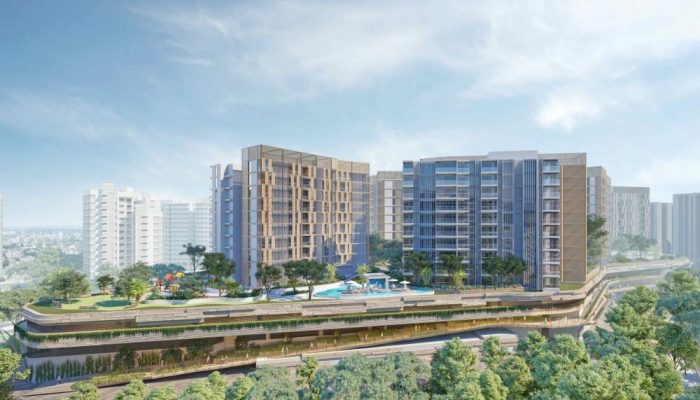 Sengkang Grand Residences @ Buangkok is a new condominium for sale within the Sengkang Grand integrated development. It comprises retail shops, residential apartments, and community facilities such as a food centre, community club, and childcare centre.

It also integrates public bus and rail transport amenities at Buangkok MRT station in Sengkang Central, in a one-stop venue.

Sengkang Grand, and Sengkang Grand Residences, are being developed by a collaboration of two of Singapore’s most experienced and reputable real estate companies, City Developments and Capitaland Limited.

This is the first time in 10 years that the two property heavyweights are joining forces to build a project in Singapore. 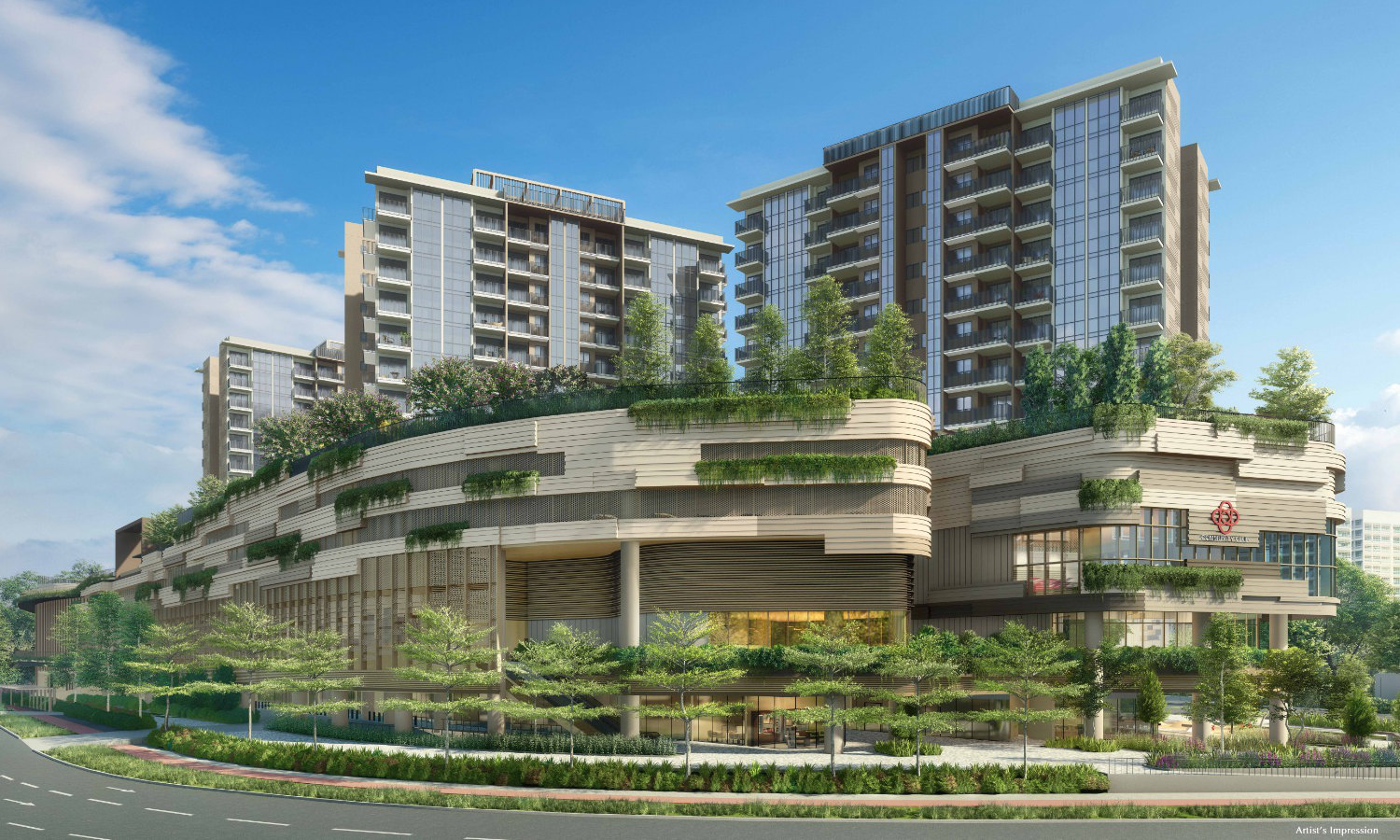 This integrated development will comprise a residential component above a three-storey podium mall housing retail shops, a supermarket, and a one-stop community and transport hub.

The residential section, Sengkang Grand Residence, offers 680 apartments across 9 towers. An optimum mid-size, neither too big nor too small. 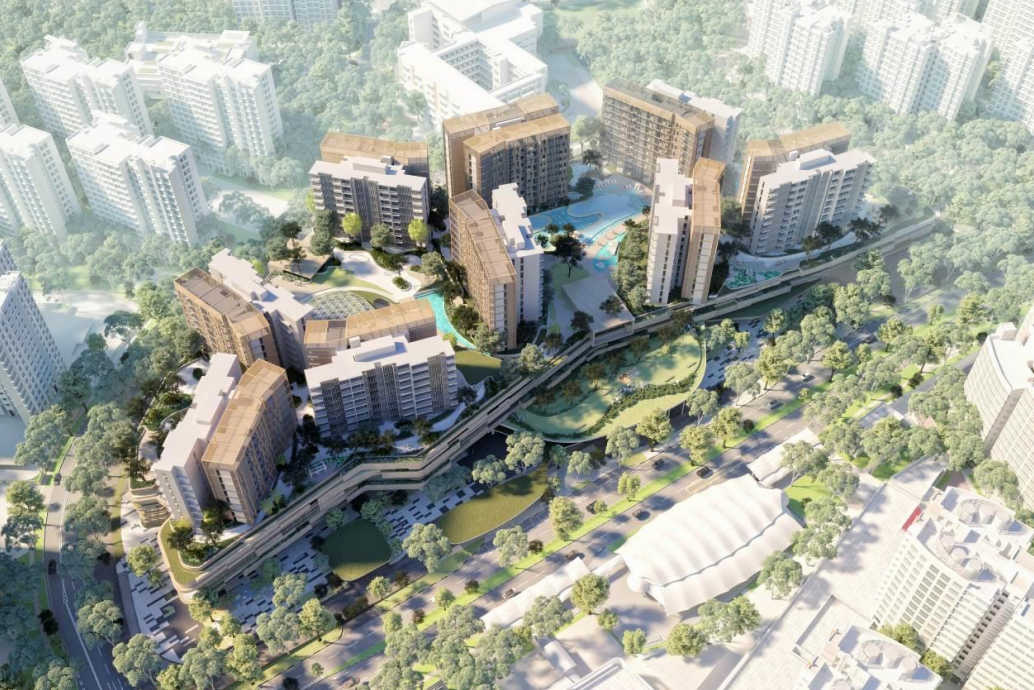 The level 4 condo deck will be lushly landscaped, and provide a wide range of facilities.

The podium block will house a new bus interchange at the first floor, a food centre at the second floor, and a community club spanning across three floors. There will be a childcare centre, civic plaza, and seamless sheltered connectivity to Buangkok MRT Station, practically at the doorstep of residents.

Yet residents will be assured of privacy and security. Sengkang Grand Residences itself will sit above the podium, separated by design and physical barriers.

Within the condominium, amidst its pools and landscaping, you are separated from what is happening below. You can choose to stay cloistered above, or venture down to engage in the community bustle. 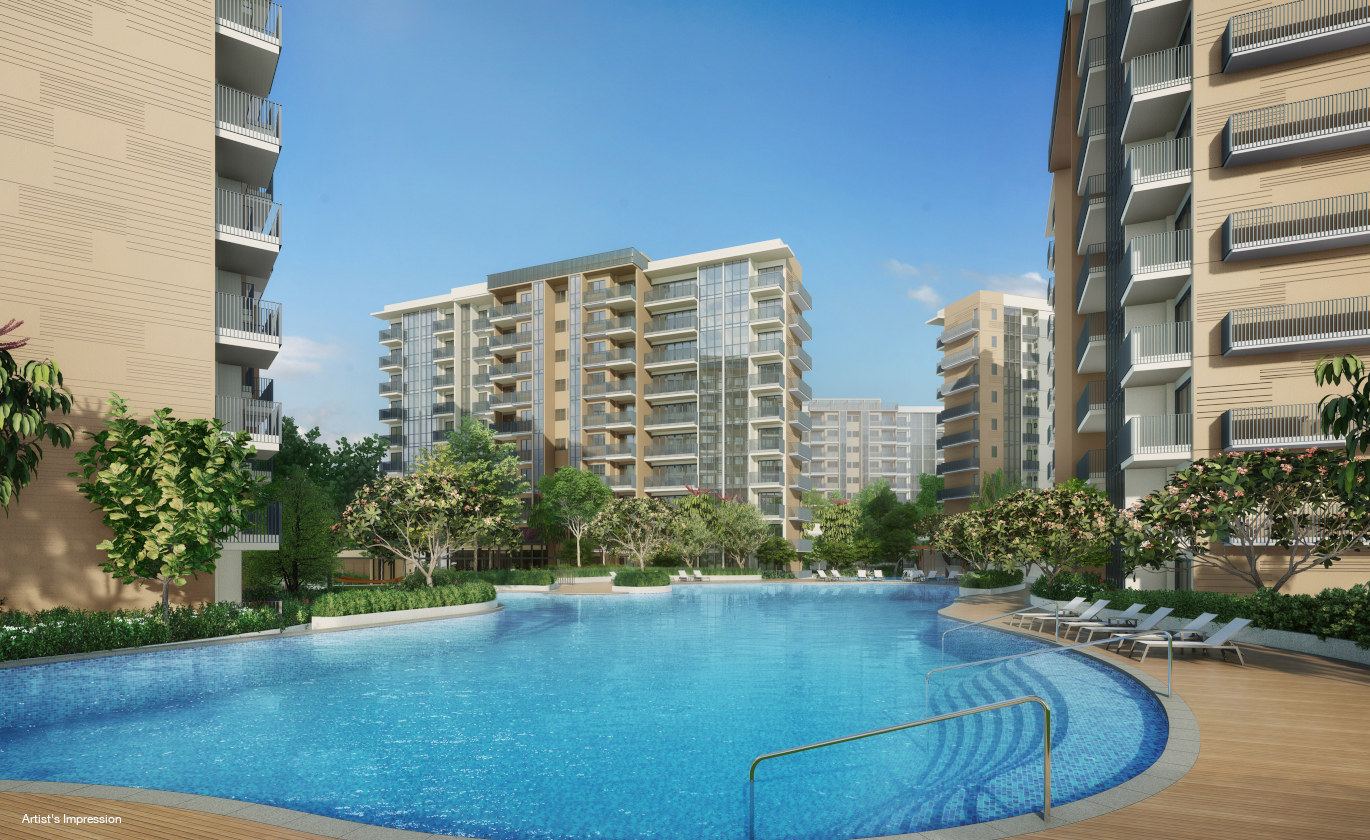 Management of the Retail Component

In mixed developments, one important aspect is whether the commercial component becomes a vibrant roaring success that increases the value of the property as a whole, or a dismal flop. To that end, experienced and strong management of the retail element is key.

Both Capitaland and CDL have proven track records in this respect. They have delivered mixed developments that fuse live, work and play elements, in projects like Bedok Residences and the prime The South Beach and South Beach Residences. 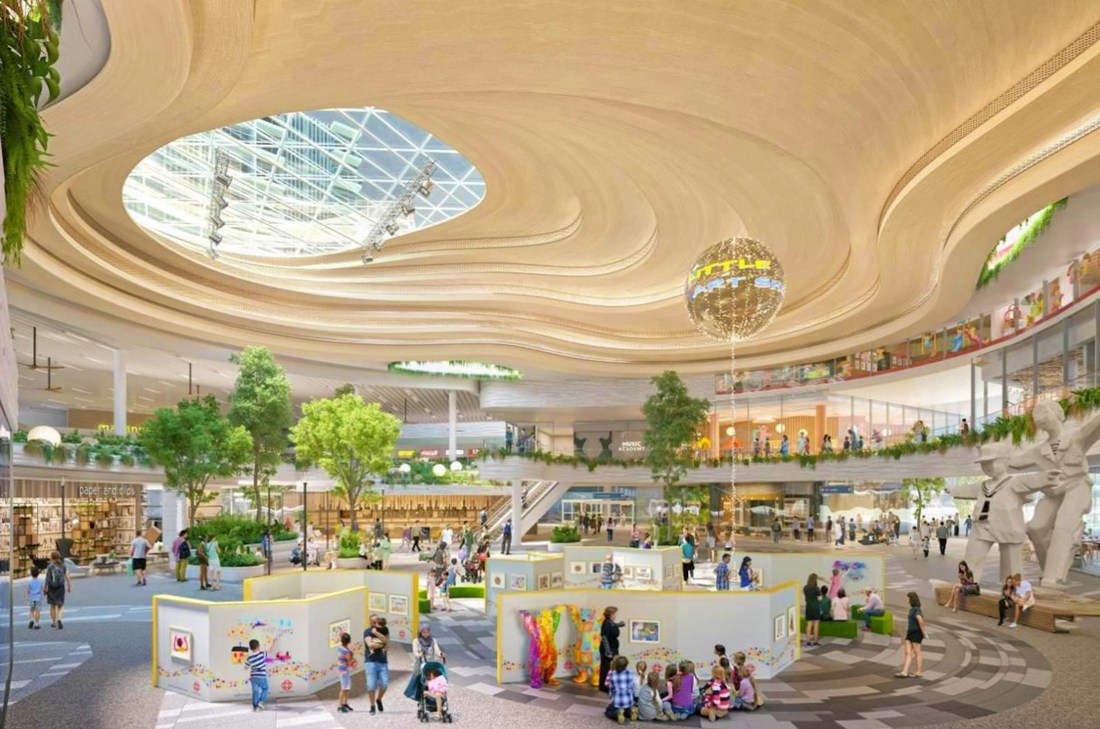 Inherent to that of course, is the fact that the retail shops must be under one management. This will be the case in Sengkang Grand. Capitaland and CDL will not sell off the commercial space as individual strata units, but keep ownership and management over them.

Sengkang Grand Residence is targeted to complete in the first half of 2022.

For such land tenders, design concepts are evaluated first and prioritised over the bid price. 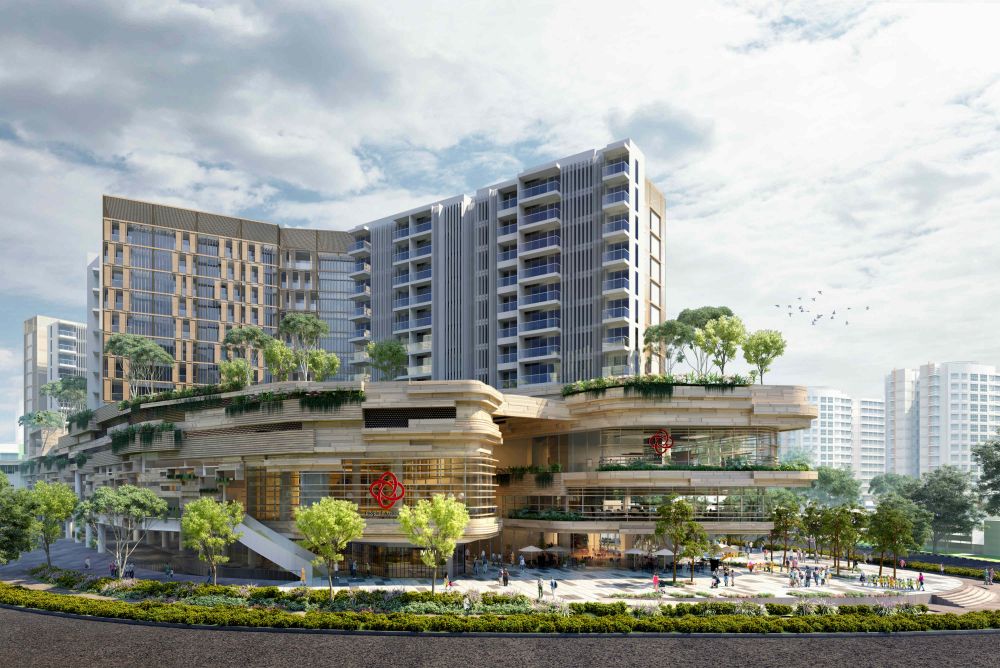 In awarding the Sengkang Grand Residences site, URA said that the proposed scheme is “… compelling in its design concept and planning of the public realm”.

CDL will partner with Capitaland to transform and shape the site into a landmark development that blends distinctive architecture with lush landscaping.

It will be the new focal point for the Buangkok neighbourhood, intended to add liveliness & buzz to the community here. 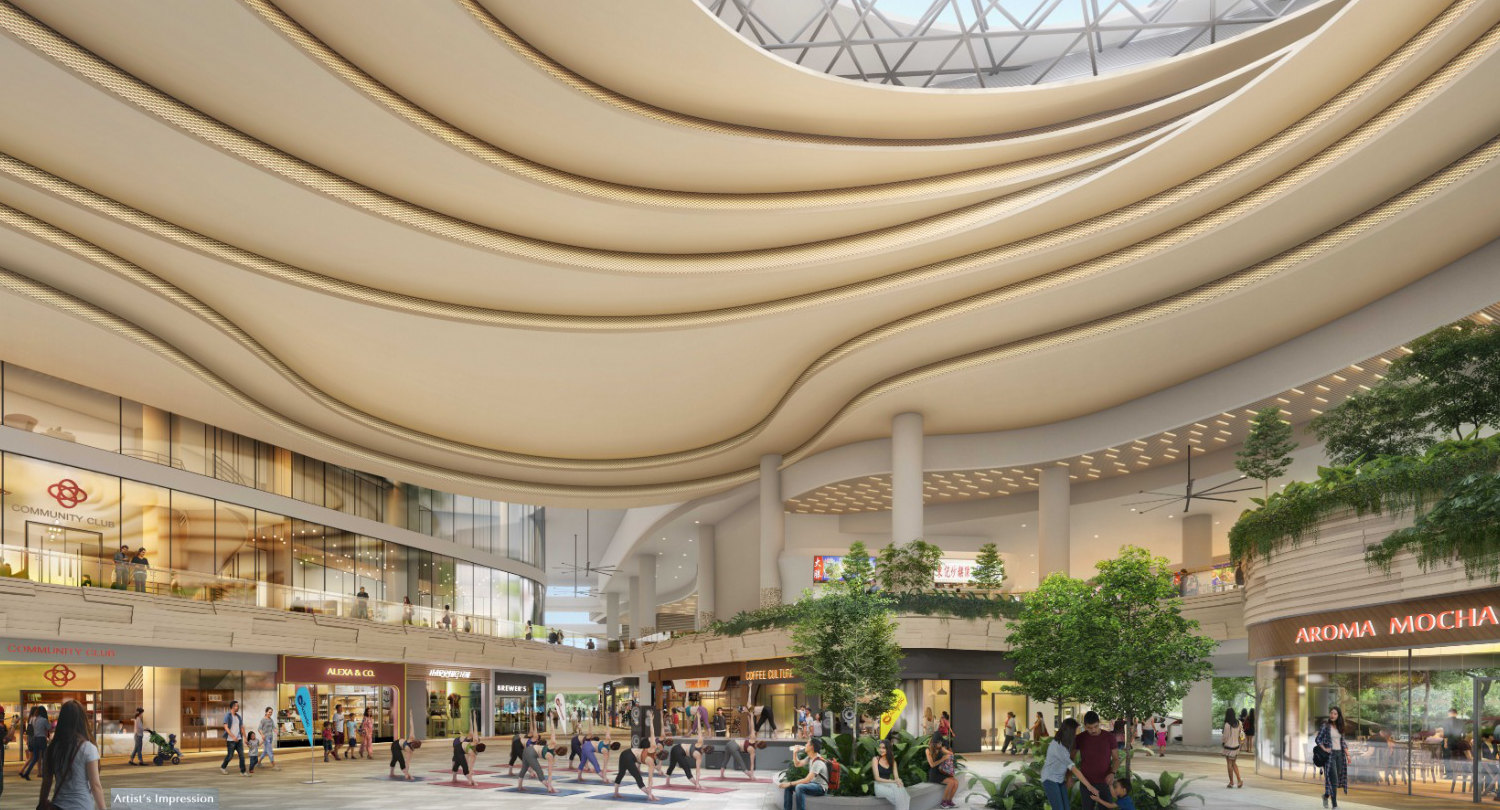 There is a strong emphasis on design in this project.

Sengkang Grand Residences will contribute to the walkability of the neighbourhood by incorporating a linear green park that runs along its full frontage along Compassvale Ancilla Park and Sengkang Central.

It will feature a variety of plants, creating different sensory experiences. It will also be designed with street furniture and an Outdoor Activity Plaza, that create a sense of “place”.

The existing Compassvale Ancilla Park extends into the community as well. A garden ramp, called a “Green High Line” will provide residents and park users direct access from the park to the 2nd-storey food centre.

A community plaza in the centre of Sengkang Grand, will be an appealing sheltered, yet naturally ventilated, public space for gatherings and events.

So besides direct access to a mall, a food centre, a bus interchange, and Buangkok MRT station, what else do we have here?

For a start, some of the residential blocks at Sengkang Grand Residences are within 1 km from Nan Chiau Primary School. For that matter, it is also within 1 km of seven other primary schools, with one of those being right next door.

By the way, Buangkok MRT station is on the purple North-East line, nine stops to Doby Ghaut station. That is a 20 minute train ride, which is generally considered quite accessible.

For investors wondering about the rentability of this Sengkang Central condo, that ought to be comforting. Lots of potential tenants like the sheer convenience of living on top of a mall linked directly to an MRT station, that comes with privacy, security, and amenities.

As summarised by CDL Group CEO, Mr Sherman Kwek: “We see tremendous potential in this site which has exceptional attributes… a one-stop community hub, it will be integrated with a new bus interchange and connected to the existing Buangkok MRT Station. Various amenities and recreational facilities such as a hawker centre, childcare centre and civic plaza will be right at residents’ doorsteps, giving rise to a vibrant and bustling community.”

Acquisition and Cost of the Site . Click to Open / Close

Sengkang Grand Singapore · How the Land Was Won

For the bidding for this Sengkang Central integrated development land tender, six tenderers submitted seven bids. (One of them submitted two bids.)

This was a dual-envelope tender. The bidders were required to submit their tender prices and concept proposals in separate envelopes. When the tender closed on 21 June 2018, URA evaluated the concept proposal envelopes first.

Only four concept proposals that substantially satisfied the evaluation criteria, were picked to proceed to the 2nd stage of tender evaluation.

Besides the Capitaland + CDL bid, the other three were from tie-ups of Perennial Singapore with Qingjian Realty, Singapore Press Holdings with Kajima Development, and Keppel Land with Wing Tai Holdings.

At the second stage, the price envelopes of the four shortlisted concept proposals were opened. The Sengkang Grand Residences site was then awarded on 16 August 2018, to the tenderer with the highest bid of the four, the Capitaland with CDL tie-up.

CDL felt that its strong track record of compelling design concepts had probably enabled it to secure prime sites like this one, as well as The South Beach and Quayside Collection sites before it, under the dual-envelope system.

Please provide your details via the Contact Form below if you wish us to send you the Sengkang Grand Residences floor plan brochure.

One and 2 bedroom units will come with a cool colour theme; 3 and 4 bedroom apartments will be finished from the warm colour palette.

The Sengkang Grand site is big, in fact the largest new commercial + residential site since 2015. It is also an irregular, almost triangular shape that makes for interesting organic design.

The site is bounded by Sengkang Central road on its east, and the curving Compassvale Bow road on its south.

This land parcel is hence an almost island site. So residents of Sengkang Grand Residences should have some breathing space, away from immediate neighbouring blocks. Especially units on the west of the site, given that the school is less than 6 storeys high. 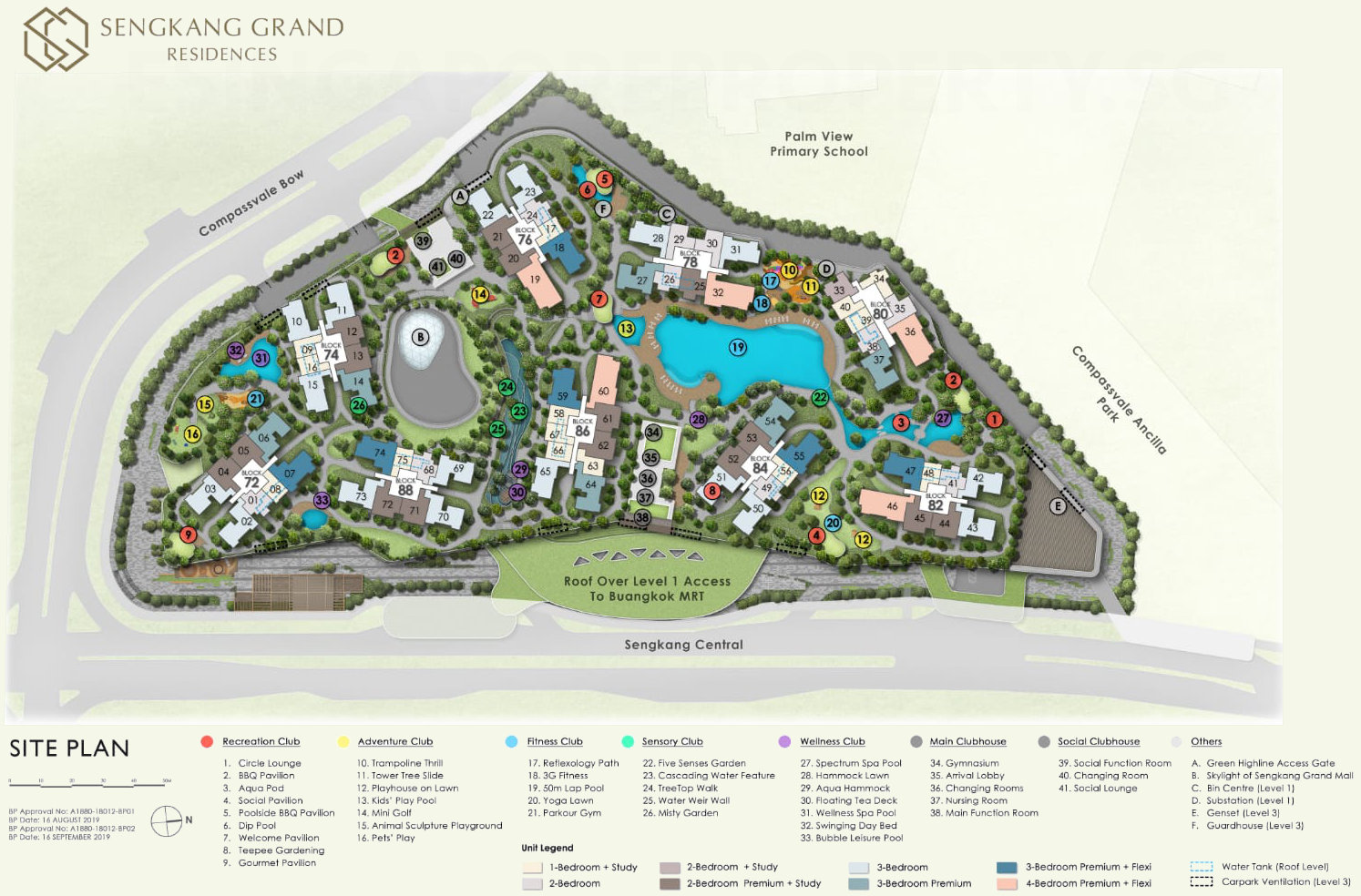 Its communal facilities are spread across the wide expanse of the E-Deck over the podium.

These include 5 lifestyle clubs and 2 clubhouses, featuring over 40 types of facilities, such as a 50m lap pool, poolside BBQ pavilion, an aqua hammock, treetop walk, parkour gym, trampoline, and a pets’ play area. 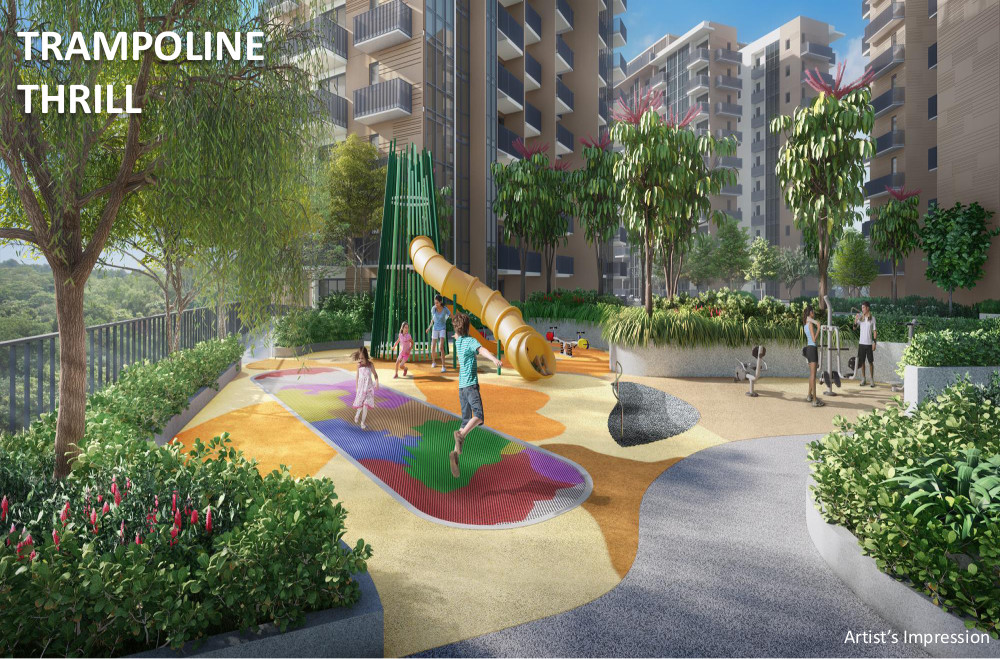 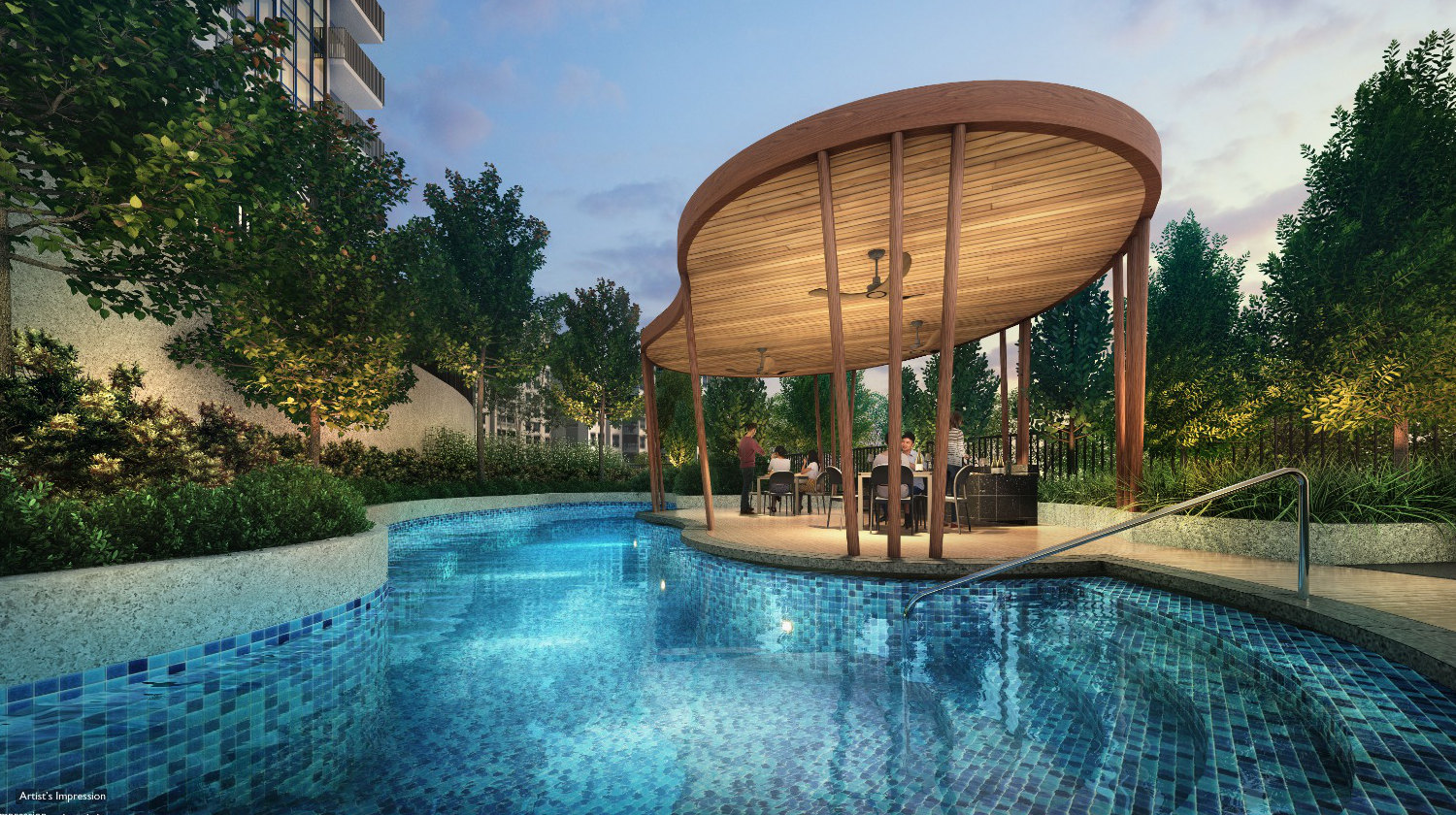 Please drop us a note in the Contact Form if you wish to view the Sengkang Grand Residences showflat. By advance appointments or online walkthroughs (Virtual Open House). 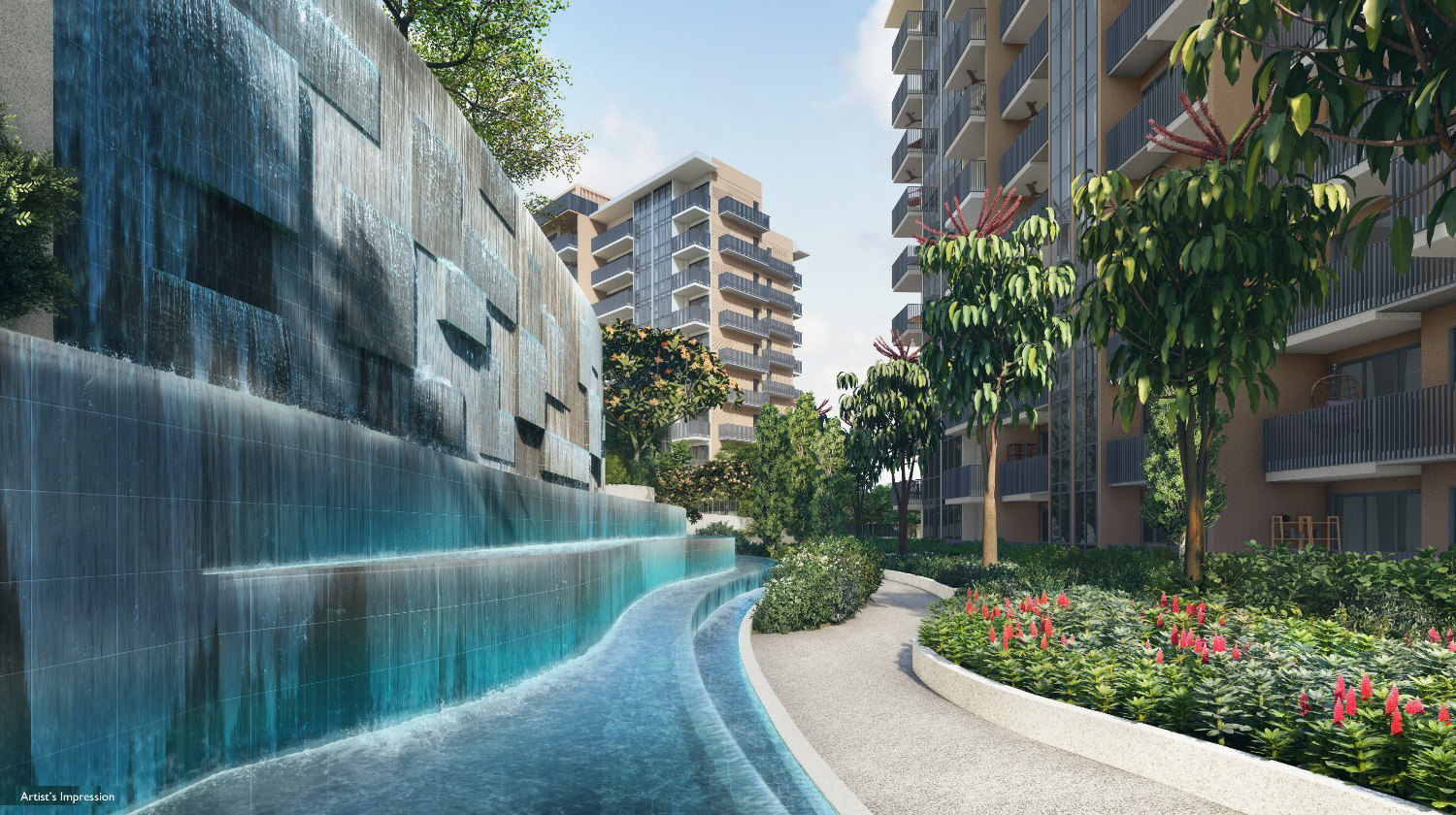 Listed here are the indicative Sengkang Grand Residences pricing as at 21 June 2020. (Note: Prices are subject to change without notice or as units are sold.)

Please let us know via the Contact Form if you wish for latest detailed prices.

On 16 August 2018, CDL with its joint venture partner CapitaLand secured this attractive mixed-use site at a tender bid of SGD$777.78 million.

Which translates to a land rate of SGD$923.59 per sq ft per plot ratio (PSF PPR) for the 99-year leasehold site.

The non-remittable and revised ABSD rates imposed on housing developers from 6 July 2018 onwards does not apply in this case, as the tender closed before that.

After factoring in all the costs involved in developing the site, the break even could be around $1,400 PSF.

However it is difficult to predict the final selling price, as there is a commercial component in the picture.

Sengkang Grand Residences is being developed by a tie-up of City Developments Limited and Capitaland Limited.

City Developments is known to be one of the most reputable and trusted of the local developers. It has been building homes in Singapore since 1963, and is listed on the SGX.

Today the Group is one of Singapore’s largest companies, and a leading international hotel and property conglomerate. It is geographically diversified across 103 locations in 29 countries and regions. Its global portfolio includes offices, retail malls, hotels, serviced apartments, integrated developments, and more than 18 million square feet of residential space.

CDL runs a network of over 300 associated subsidiaries & companies worldwide as well. Seven are listed on the stock exchanges of Hong Kong, New Zealand, the Philippines, and London.

The main business of the Group is real estate development and investment. It is also involved in hotel ownership and management, hospitality solutions, and facilities management.

Over the course of the last 55 years, CDL has built more than 43,000 homes across the market spectrum.

Amongst its innumerable local projects are ones like Boulevard 88, Nouvel 18, Gramercy Park, Cliveden @ Grange, New Futura at Leonie Hill, The Sail at Marina Bay, One Shenton, Amber Park (both the old and the new), MeyeRise, 368 Thomson, Goldenhill Park, Golden Hill Villas, and South Beach with South Beach Residences (another mixed development) at Beach Road.

About Capitaland Limited (“Capitaland” or the “Group”)

Capitaland is one of the largest and most diversified real estate groups in Asia. While listed and headquartered in Singapore, it owns and runs a worldwide portfolio worth SGD$123 billion as of June 2019.

The Group focuses mainly on China and Singapore as its core markets, but has a footprint in more than 30 countries and 200 cities. Amongst these, it is expanding more into places like the USA, Europe, Australia, Vietnam, and India.

Capitaland has developed a number of high-profile local projects. Like One Pearl Bank, Orchard Residences, D’Leedon, Interlace, Sky Habitat, The Nassim, and the mixed developments Bedok Residences and Marina One.

Marina One . Mixed Development by Capitaland 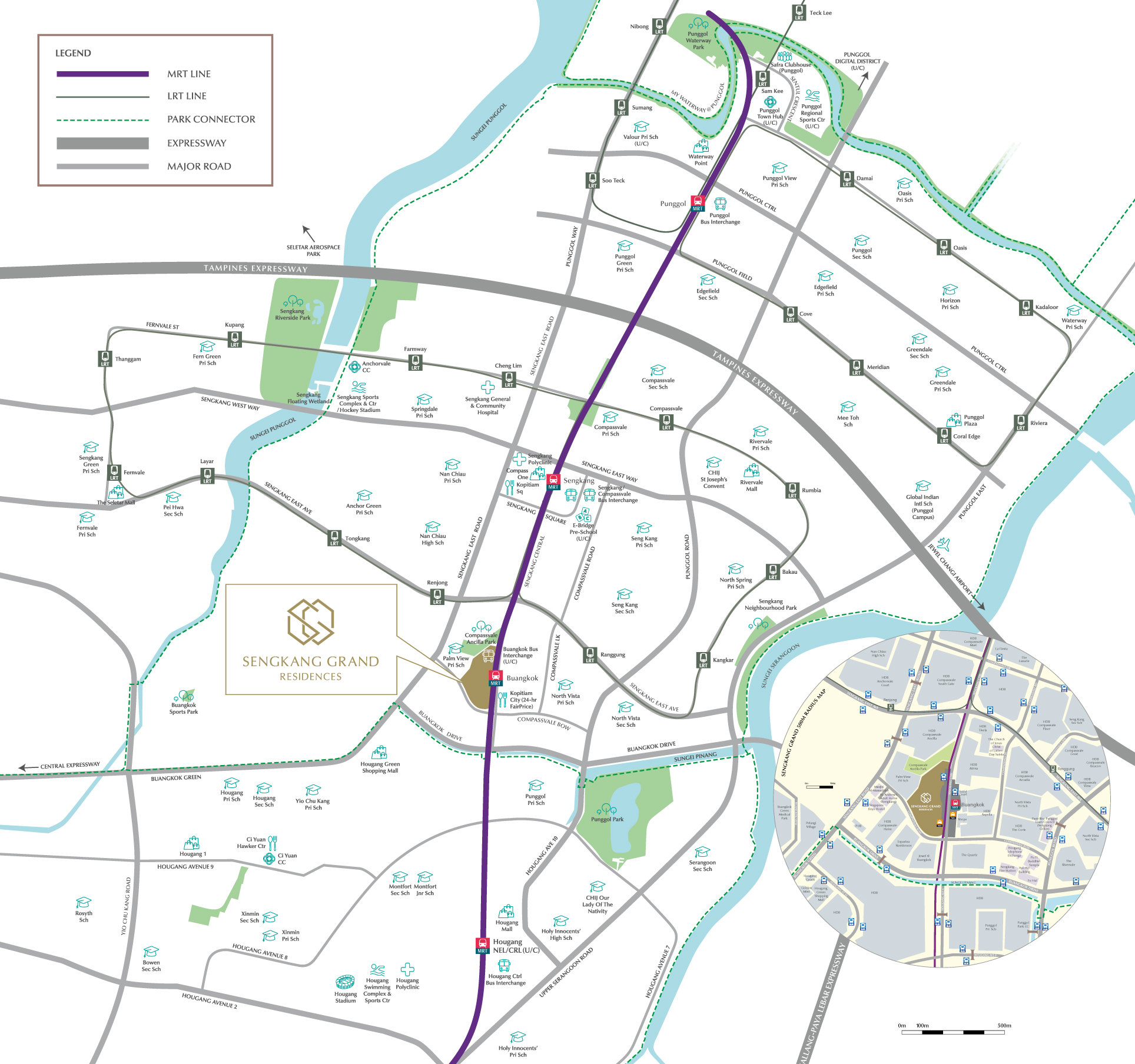