Welcome to Terra Hill Singapore. A brand new 5-storey freehold condominium at Yew Siang Road in the West Coast area, 400 metres from Pasir Panjang MRT station. It sits on elevated ground between Kent Ridge Park hill at its back, and the upcoming Greater Southern Waterfront district to its south.

It will come with a wide array of facilities, including pools, spas and jacuzzis, cooking and dining pavilions, gyms and clubhouse, set amidst beautifully landscaped grounds and gardens.

But what sets this project apart, is that Terra Hills is endowed with a rare mix of attributes. At 208,443 square feet, its land size is considered big for a new freehold project. A good size that holds better value long term – not so commonly found nowadays. Especially one less than five minutes walk from an MRT station.

It also lies on the fringe of the city-centre, and of the future Greater Southern Waterfront, with all the promise that brings.

This site was formerly that of the old Flynn Park and is tucked within a purely private residential enclave. It is surrounded by landed houses, and other low-rise condominiums. 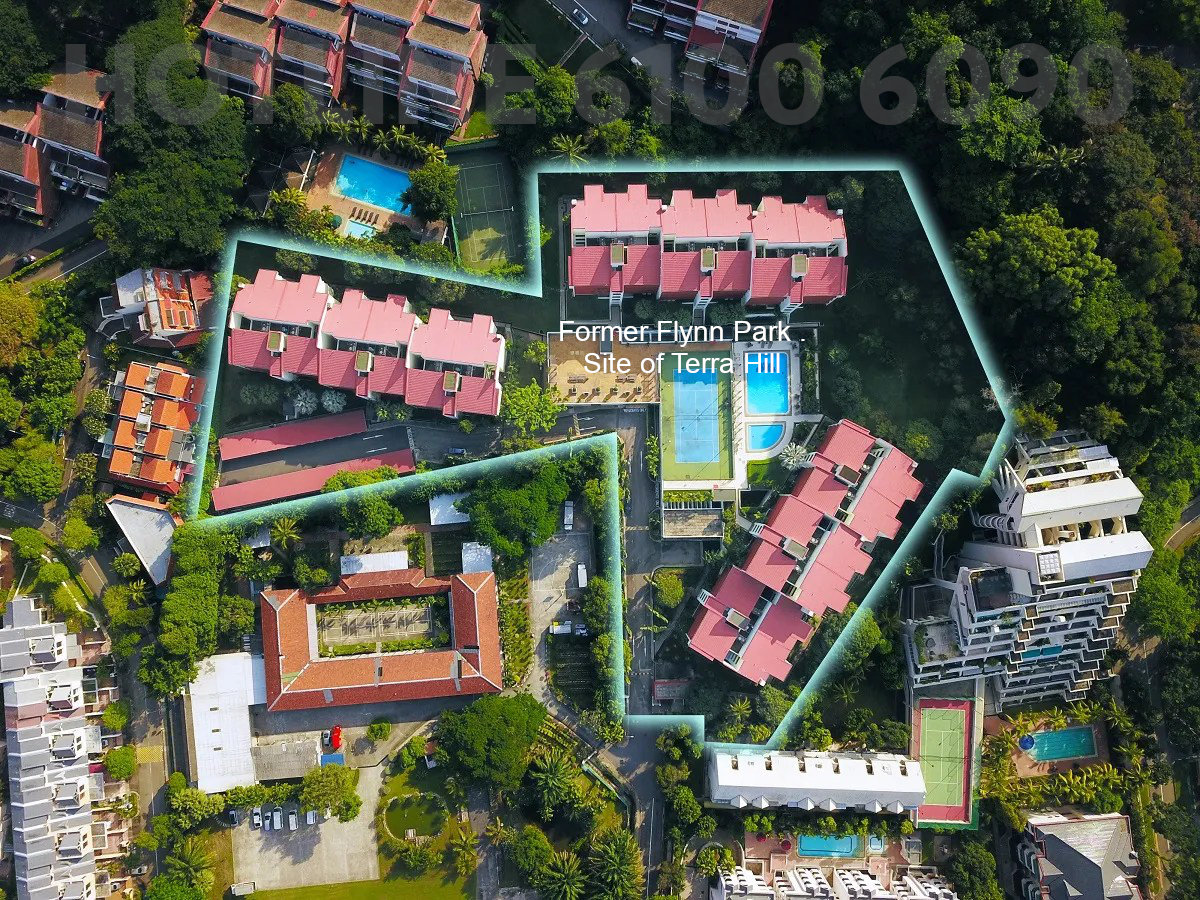 The low-density residential character of the estate against the backdrop of a large swathe of greenery, gives the neighbourhood a secluded feel. The Terra Hill condo fits into its surrounding, creating a space away from the stresses and hustles of city life. Here, one can wind down in the midst of a green and calm landscape, and friendly breezes.

Small wonder then, that the tender for the original Flynn Park en-bloc collective sale was “keenly contested”. Such almost “ideal” sites are hard to come by.

A partnership of Hoi Hup Realty and Sunway Developments won the tender, and is developing and launching the project. This same partnership launched the 660-unit Ki Residences in early 2021, and sold over 600 of the units by mid 2022.

The Terra Hills condo is expected to sell pretty quickly too, going by recent 2022 launch records. Particularly as the other projects in the vicinity are practically all sold out as well.

About the Terra Hill Condo Location

Our Terra Hills condo is located along the west coast of Singapore, off Pasir Panjang Road. This area as of now is not as well known, or as hyped, as its eastern counterpart, the East Coast.

Hence it is generally not as pricey (for now), and so can perhaps offer better pickings, and better upside potential. Because change is coming to this corner of Singapore.

The Pasir Panjang Port off the coast here, that hitherto has tended to depress property prices, is moving out. It is relocating to Tuas, as the lease will run out after 2027. 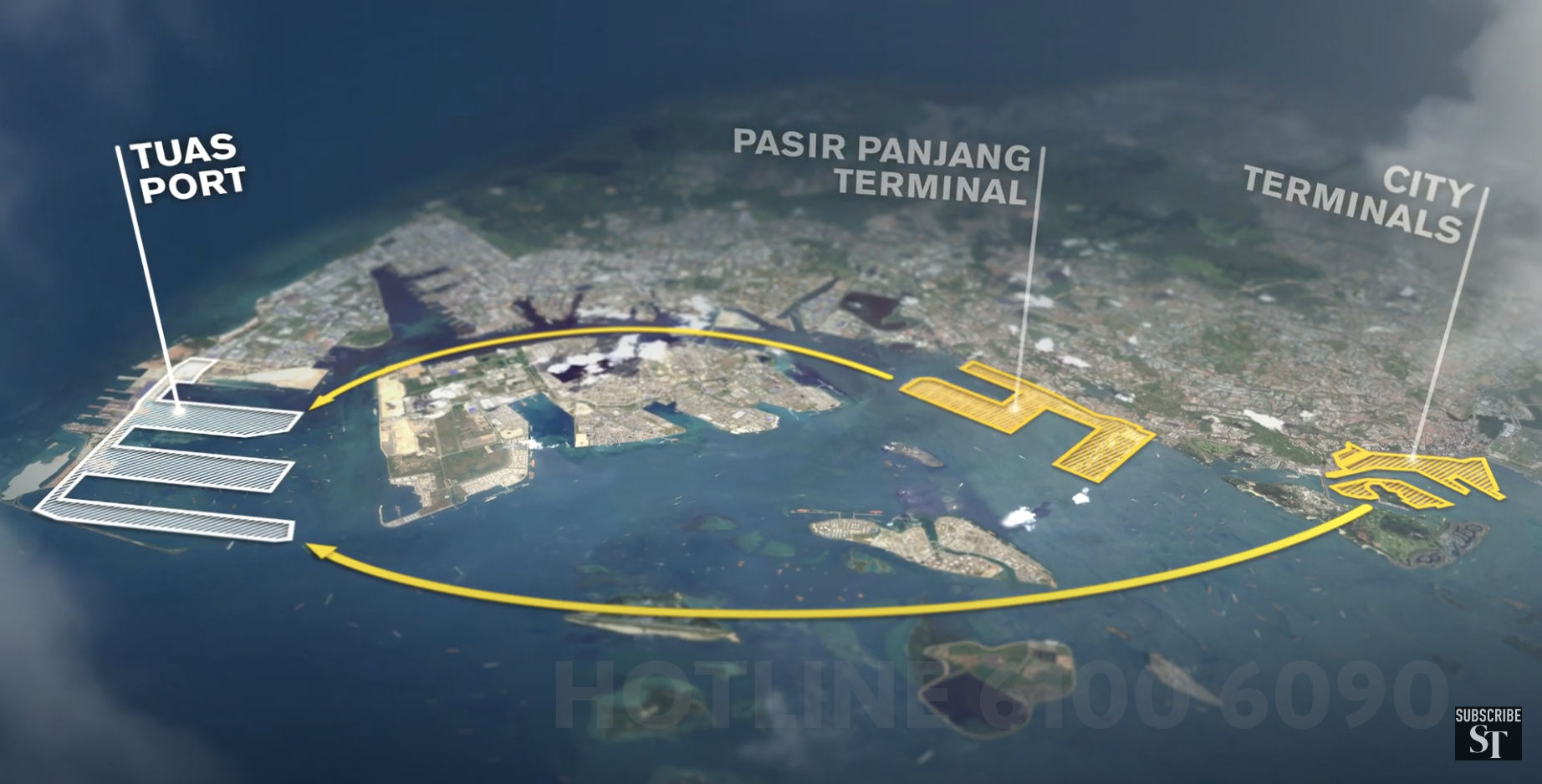 In its place will arise the Greater Southern Waterfront City, URA’s grand plan to redevelop the entire west coast. The Greater Southern Waterfront will stretch across 30km of coastline from Gardens by the Bay to Pasir Panjang. It is set to vitalise the West Coast and make it an exciting place to live and work in. In tandem with that, property values in this area are expected to rise. 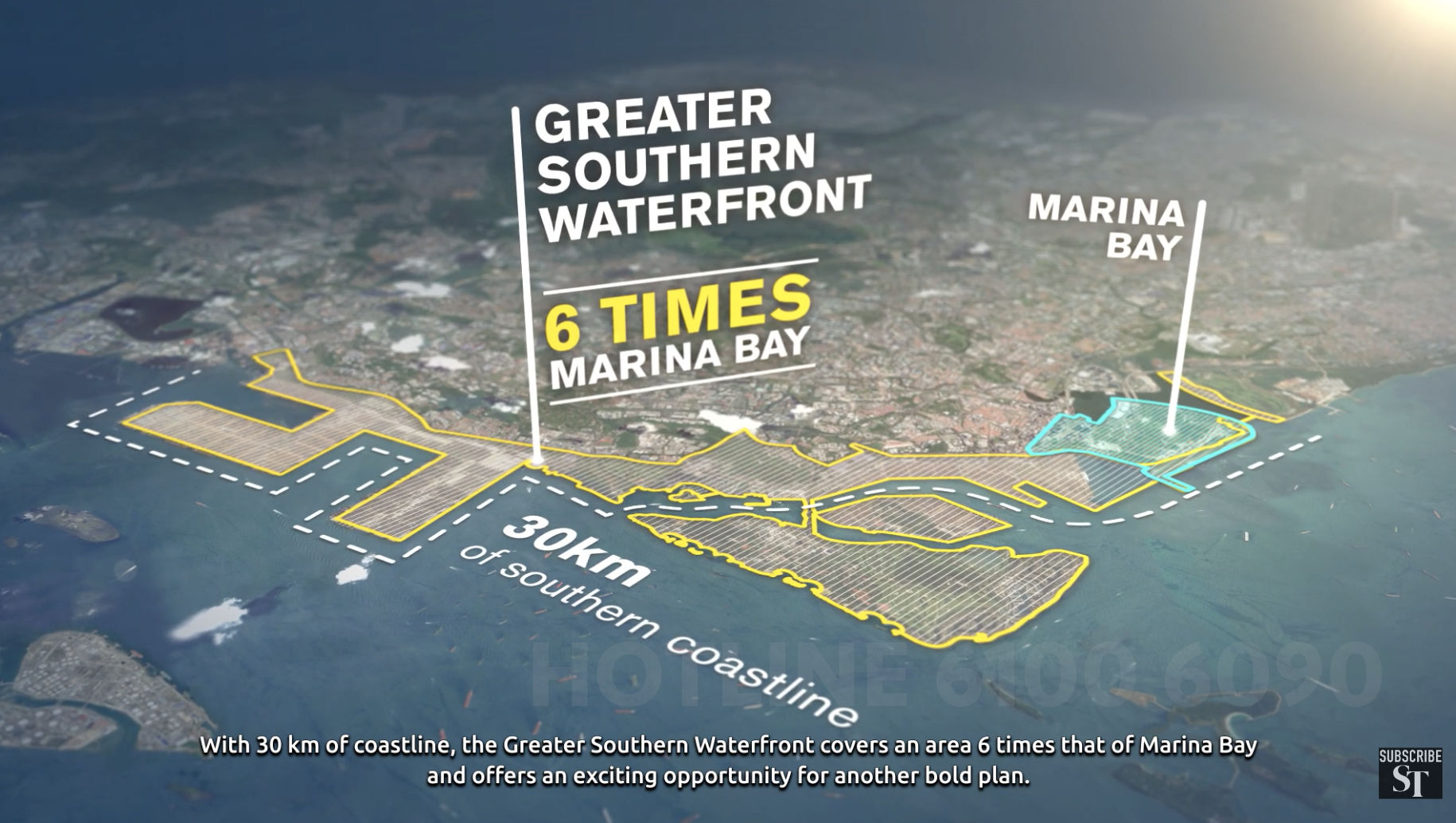 In fact the Terra Hill location is already very attractive on many counts. It is close to the CBD, being actually within the RCR (Rest of Central Region) zone. Yet it is sits next to a nature reserve, part of the Southern Ridges Green Belt.

It is also close to the research and education hubs, and business parks, of Kent Ridge, Buona Vista, and Mapletree. And of course, it is that rarity, a good-size freehold launch 5 minutes walk to Pasir Panjang MRT station. This station is on the Circle Line, and three stops to Harbourfront and the amenities of VivoCity mall.

As Mr Galven Tan, Savills deputy managing director of investment sales and capital markets who handled the Flynn Park collective sale tender put it: “Such prime mid-sized sites are exactly what developers are seeking. Furthermore, once completed in 2025, the Circle Line will connect the new development to Marina Bay Financial District in just seven stops.”

The tender was hotly contested, leading Mr Tan to add, “The result is testament to the strong attributes of the site – the unique opportunity to develop a premium product on the fringe of the city centre and just 350m from an MRT station, yet right next to lush and mature nature parks.”

This neighbourhood, on the south slopes of Kent Ridge Park, is quieter and less dense than most parts of Singapore. Its low-rise private residential nature and soothing environment, makes for a very attractive place to come home to. And with its lushly landscaped spreading grounds, this laid back appeal extends into the Terra Hill condo too.

Yet its tranquility belies the fact that this estate is actually barely five minutes drive from several hubs of activity. It is close to many tertiary campuses, research hubs, and science and business parks on its north and east. These are likely to be sources of tenants as well as potential buyers.

With few new launches coming up in the west of Singapore, Terra Hill is certainly worth a second look. Particularly if you want freehold, within a short walk from an MRT station, in this part of the island.

The Terra Hills condo is located in the Pasir Panjang area. This is a short video of what can be found around here.

Kindly drop us a note below if you wish for the Terra Hill condo floor plans to be emailed to you once ready. Thank you.

The Terra Hills site is an irregular-shaped plot of land at the end of Yew Siang Road, a short cul-de-sac. It runs off Pasir Panjang Road just opposite Pasir Panjang MRT station.

It is surrounded mainly by other low-rise condominiums, like Pepy’s Hill and Island View. Except for a section on its north-east which is bordered by a part of Kent Ridge Park on the Southern Ridges.

Coming in, Yew Siang Road is flanked by a few landed houses, and a couple of small condos. Hence it is generally a quiet road, with little traffic.

Being a hill-side plot, the Terra Hill site is on slightly elevated ground. So the units facing down Yew Siang Road should be able to get unblocked, windy views towards the south.

Based on URA’s master plan, the site is zoned residential with a plot ratio of 1.4. This allows for up to 5 storey high blocks, giving the whole place an airy, open feel.

Please drop us a note below if you wish to view the Terra Hills condo showflat. Viewings for the VIP Preview are by advance appointments. 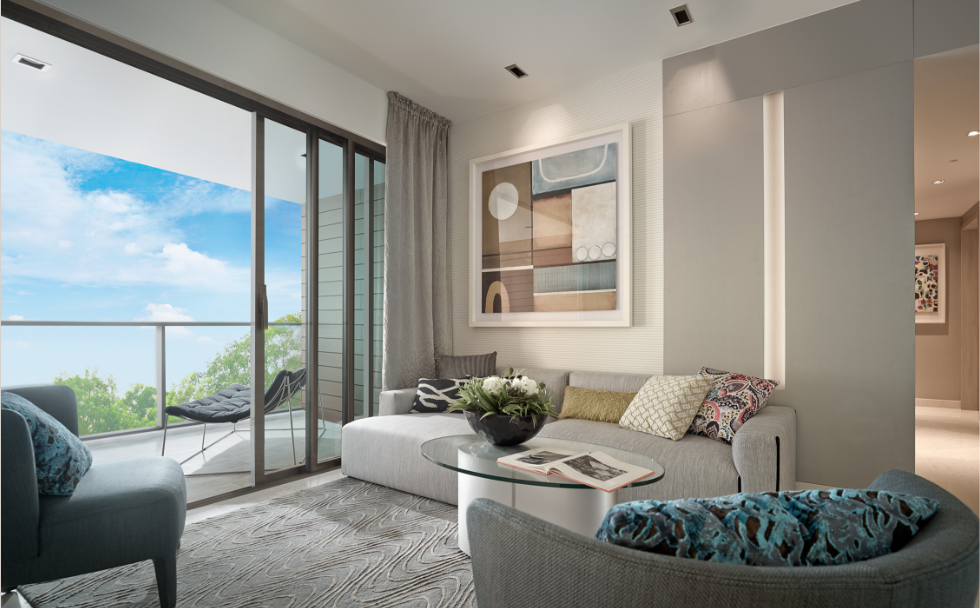 The Terra Hills condo prices have not been decided yet. Please let us know via the Contact Form if you wish to be kept updated on the pricing once available.

The Terra Hills site was that of the former Flynn Park, that launched for collective sale by public tender on 28 July 2021. A joint venture of Hoi Hup Realty & Sunway Developments won the tender in September 2021 with a bid of SGD$371 million.

This works out to a land cost of SGD$1,355 PSF PPR (per square foot per plot ratio). But if we count the 7% bonus balcony space too, the land rate will equate to $1,318 PSF PPR instead.

After adding all the construction, funding and overheads, the break-even will likely be close to SGD$2,000 PSF. Hence the eventual selling price will be north of that. Especially as this is freehold, and other RCR Rest of Central Region) leasehold projects are already selling at above $2,200 PSF.

Both are reputable and well established developers. Between them, they have several decades of local real estate industry experience under their belt.

Among their joint works in Singapore are projects like Sea Esta, Miltonia Residences, The Peak @ Toa Payoh, and Vacanza @ East. 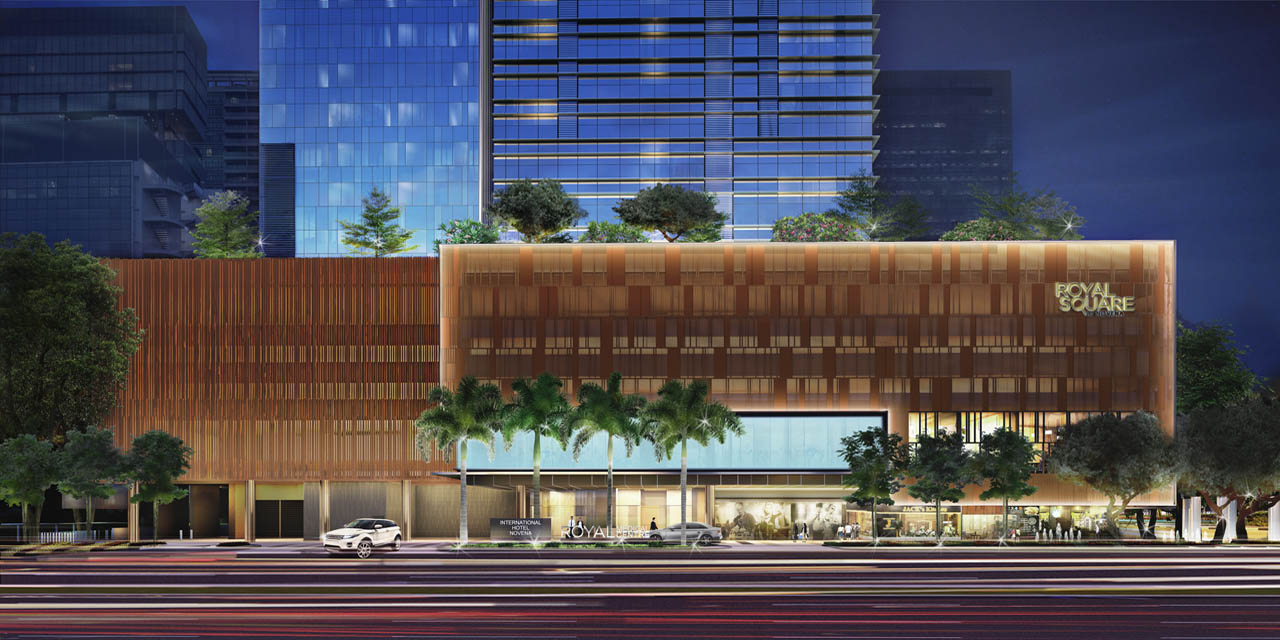 Hoi Hup Realty started operations as a property developer in Singapore in 1983. Since then it has completed a range of projects.

These include landed and cluster housing developments, private as well as executive condos, and even mixed-use projects. To date, the Group has helped to add close to 8,000 homes to Singapore’s housing market.

The latest of their launches, in conjunction with Sunway, was Ki Residences, that is currently under construction. This was launched in early 2021 and sold 93% of its 660 units in less than one and a half years. Part of this success can be attributed to their ability to understand what buyers need, and to translate that into their product.

In fact, Hoi Hup’s strength probably lies in its accumulation of experience and knowledge over the years. And in its dedication to using that experience to create spaces that embody quality, comfort and functionality.

This has led the Group to clinch several building awards & accolades, that bear testimony to its standards of build quality. Among these are BCI Asia’s Top 10 Developer Awards for a number of years. 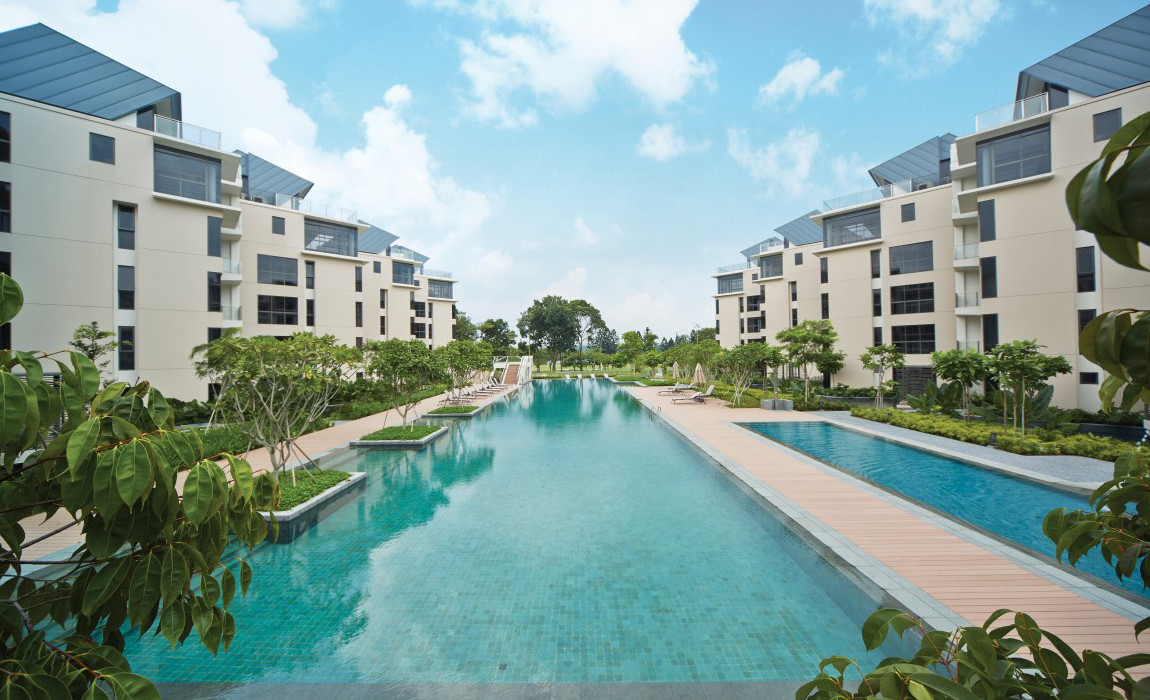 Sunway Developments is a wholly-owned subsidiary of the Sunway Group, a large Malaysian MNC or conglomerate.

The main business model of the group is in property development and investment that includes the design and construction of mega-projects (like Sunway City). It is also involved in information technology, education, leisure, and hospitality, as well as real estate REITs, and the supply of building materials.

Incidentally, Sunway is one of Singapore’s leading concrete pre-casters too. It has carried out both private and public sector work locally, and completed several Design-and-Build projects.

Sunway has won awards for its work, from international bodies like FIABCI and IFAWPCA.

URA has drawn up plans to transform the south-west coast, from Marina East to Pasir Panjang, into a grand waterfront city and major gateway. Named the Greater Southern Waterfront, this ambitious plan will cover 1000 hectares, 2.5 times the size of Marina Bay. It will incorporate a 30 KM nature trail from Gardens by the Bay, running all the way to Labrador Park.

Development will take place in phases over the next 5 to 10 years. The first phase is slated for completion by 2030. Preparation work has already begun, with the clearance and move of the Tanjang Pagar port operations to Tuas. The Pasir Panjang Terminal just south of Terra Hills Singapore will be the next to go. The Mount Faber, Pasir Panjang Power District, and Keppel Club areas will be among the first to start development work.

Email the Sales Channel here, or contact us at: